In the midst of ongoing Senate negotiations over the GOP's massive coronavirus stimulus package, House Democrats drafted a competing 1,400-page proposal packed with distinct policy differences that would cost an estimated $2.5 trillion.

The House measure, unveiled on Monday, includes notable changes from the Republicans' bill, which has twice failed to muster enough support during Senate test votes.

In addition to increasing the cash check that some Americans would receive to $1,500 from the previously proposed $1,200, the House proposal — titled the Take Responsibility for Workers and Families Act — would mandate "green" rules for airlines, eliminate a temporary suspension of the payroll tax and provide additional help for hospitals, schools and food banks.

It would also extend paid sick leave benefits to cover some individuals, like health care workers and first responders, who were excluded from a second stimulus measure already signed into law by President Trump. 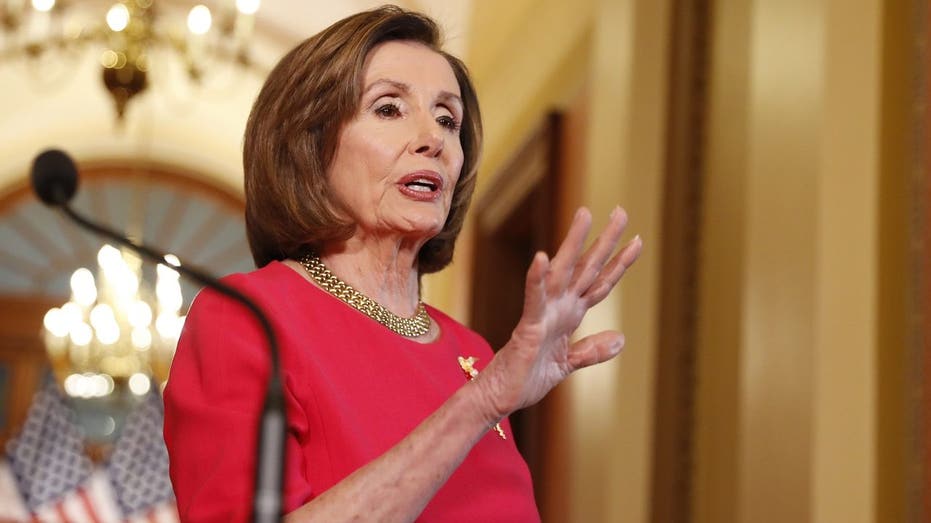 Rather than eliminating the payroll tax, the Democratic plan would extend tax relief to Americans by expanding health insurance premium tax credits under the Affordable Care Act and shoring up the Earned Income Tax Credit, the Child Tax Credit and the Dependent Care Credit.

While some elements of the Democratic bill already exist in the Republicans' proposal, such as business tax relief, aid for small businesses and penalizing price gougers, the House measure goes further in many instances.

CORONAVIRUS OUTBREAK TO CAUSE SHARP CONTRACTION IN US ECONOMY: GOLDMAN SACHS

For instance, the latest bill would prevent corporations from using taxpayer money for stock buybacks and would inject nearly $40 billion into schools and universities to stabilize funding. It also directs billions of dollars in grant funding for states to hold this year's election through the Election Assistance Commission and a national requirement for both 15 days of early voting  and absentee voting.

Democrats also attached strings to the billions of dollars in loans that airlines would receive, insisting they needed to cut their carbon emissions in half by 2050. The bill would also provide $1 billion to help develop sustainable fuels for planes and create a program for the government to purchase less-efficient aircraft.

Republican leaders slammed the additional provisions included in the Democrats' bill, accusing their colleagues of using COVID-19, the disease caused by the novel coronavirus, to force through a progressive agenda.

The proposal comes after Senate Majority Leader Mitch McConnell blamed Democrats for delaying progress on a response bill. Democrats on Monday held up the aid for a second time, saying they would not pass the $1.8 trillion bill until they secured stronger worker protections and put restrictions on bailouts for businesses.

"We Democrats are trying to get things done, not making partisan speech after partisan speech," Senate Minority Leader Chuck Schumer said. "Our goal is to reach a deal today, and we are hopeful, even confident, that we will meet that goal."

At the center of the dispute is Senate Republicans' calls for a $500 billion fund that the Federal Reserve could leverage for loans to help companies and use to provide industry-specific loans. Congressional Democrats have insisted the bill needs guardrails to prevent firms that receive the aid from firing their workers or stripping them of their health care, and have also questioned giving Treasury Secretary Steven Mnuchin so much leeway to determine which companies receive the assistance.