Investors and analysts say a "worst-case scenario" may be unfolding for oil markets, threatening the viability of a multibillion-dollar pipeline of new projects and complicating planned mergers and acquisitions in the sector.

The value of Australia's energy sector plummeted $17 billion on Monday as the global oil price suffered its sharpest single-day drop since the Gulf War of the early 1990s. On Monday, oil prices fell by as much as 30 per cent after Saudi Arabia started a price war with Russia by cutting its selling prices and pledging to bring greater oil supply into a market already suffering from falling demand due to the coronavirus outbreak. 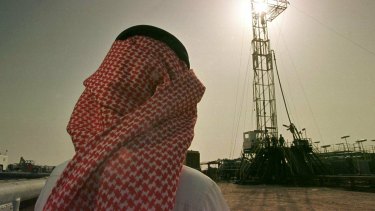 Global oil prices plunged more than 30 per cent on Monday.Credit:AP

In its biggest-ever intraday decline, Australia's energy sector lost an alarming 20 per cent of its total value on Monday as ASX-listed oil and gas producers took a battering. Oil Search shares shed 35 per cent, Santos lost 26 per cent, Woodside 18 per cent and Caltex 15 per cent.

"How low can oil go?" Fidelity portfolio manager James Trafford said. "A number of factors will weigh heavily on medium-term prices, including whether a political solution can be attained to resolve the apparent OPEC+ standoff and how quickly the virus-hit areas return to normal levels of demand."

Relations between Russia and Saudia Arabia, the two top oil exporters, deteriorated last week after Russia refused to agree to production curtailments proposed by the Organisation of the Petroleum Exporting Countries (OPEC) as a way to stabilise plummeting prices. Demand was already withering due to widespread travel lockdowns to contain the coronavirus outbreak, causing a glut in petrol and jet fuel. After already falling 10 per cent on Friday, the price of Brent crude fell 26 per cent to $US33.40 a barrel

"You’ve got the coronavirus, and then on top of that, you've had the OPEC members decide to cut production and the Russians decide not to join then, pushing the prices down even further."

As the price of Australia’s exports of liquefied natural gas is linked to the oil price, Dr Bethune said the fall could pressure the balance sheets of producers including Santos, Woodside and Origin, and imperil the viability of the nation's multibillion-dollar pipeline of future LNG project investments.

"Their ability to generate cash is obviously much less than it was,” he said. “And that has a feedback to development of new projects and drilling and exploration."

The heightened degree of uncertainty in the oil sector could also complicate possible mergers and acquisitions being considered in Australia's oil and gas industry, including a proposed takeover of fuel supplier Caltex.

"Were we to go below $30 a barrel, and we are almost there in West Texas Intermediate, that would inflict an enormous amount of pain across the oil sector."

"If they were to increase production we'd have an additional 1 million barrels per day in the market that doesn’t have a home," Mr Gordon said. "That will inflict an enormous amount of pain across the oil sector."