This column is coming to you from the sunny balcony of my apartment – the Herald and The Age having moved to work-from-home arrangements since Monday. But it’s not all pyjamas and Ugg boots over here. Oh, no.

I’ve just spent the morning both supposedly “working from home” and home-schooling my five-year-old, after his school decided to implement a day-and-a-half trial shutdown. 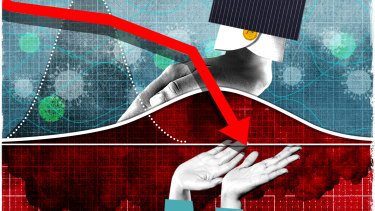 The day began enjoyably enough, with a vigorous physical exercise session dancing to Korean pop tunes on YouTube. At 8:30am, we promptly logged into an app on my iPhone through which Kindy teachers had uploaded various maths, reading, wellbeing and other instructional videos containing assignments for us to complete.

I am happy to report that I am now extremely well-versed in words beginning with the letter “C”, numbers that come before and after each other, and my emotional reactions to various short stories. There has been, however, significantly less time to research this column.

Which is the pertinent point.

That’s not just a stressed-out supposedly working parent talking, although it is also that. It’s the conclusion of the chief economist at HSBC Australia, Paul Bloxham, who told me via phone interview this week that the decision on whether or not to close schools holds the key to whether we trigger a deep recession.

“Once the schools stop, then the rest of the economy stops, because parents have to look after children,” Bloxham said.

There is much talk at the moment about the need to “flatten the curve” of infection rates to prevent our health system being overwhelmed and increased deaths. That is true. What is also true, but less well-recognised, is that any action we take to flatten the curve of infections only increases the steepness of the curve of recession and rising joblessness we’re about to face.

I’m lucky. I can work from home and alternate care of my child. Many other parents are not so fortunate, and any decision to close schools will leave them unable to earn income.

It’s like so many of the other diabolical trade-offs hidden in the decisions currently being made.

Shut down a concert: kill the job of a performer. Cancel a flight: jeopardise the job of a travel industry worker. Eat at home and watch a hospitality worker unable to pay their mortgage.

Individually, these decisions might make sense. Collectively, they have the potential to cause enormous damage.

Economists are obsessed with bringing to light the “unintended consequences” of decisions. The unavoidable truth is that the faster we act to slow the spread of disease, the more we do to deepen the economic recession. And it’s not just about money.

Recessions – and the higher joblessness they herald – lead to higher rates of stress, relationship breakdowns, homelessness and even suicide.

Because economies are not just something that can fall to the floor and remain unchanged. They’re more like a series of spinning plates in the air: stop the spinning and some of the plates will break.

Companies will wind up that won’t reopen again. Jobs will be lost that won’t be regained once the virus has passed. Recessions leave devastating permanent stains on some parts of the economy, particularly among the rising ranks of long-term unemployed.

Last week, I wrote that this is not the global financial crisis. It’s still not. That crisis began in the financial sector and infected the real economy. It's increasingly clear that this is something else entirely. And something much more worrying, indeed. This is a wholesale and sudden collapse in economic activity driven in large part by deliberate government decisions.

In the past week, the global financial system has also caught the spooks, but this time it’s really not about them. It’s about you and me, whether we get sick and whether we keep our jobs.

But it will not have been a costless exercise.

The good news is that we can still act to attenuate the shock with even stronger government action to secure jobs and support incomes against this temporary crisis. We need to keep as many plates spinning in the air as we can, and we need to try to catch as many of the ones that fall before they break.

The Reserve Bank is poised to announce action on Thursday to cut interest rates again and launch a program of buying up government bonds to increase the supply of money in the economy and reduce the cost of borrowing.

The government too is working on more stimulus. With interest rates practically at zero, there is little alternative left.

More broadly, for those questioning why we don't just shut everything, self-isolate and stay at home, I urge you to at least consider the important trade-offs being weighed in the balance. And for goodness sake, please don’t shut schools until the medical authorities say this is warranted.

And if they do, for goodness sake, please send wine.