Former NYPD Commissioner Howard Safir argues police must deal with protests and not give up their cities because they are afraid of political correctness.

MINNEAPOLIS (AP) — Another night of unrest in every corner of the country left charred and shattered landscapes in dozens of American cities Sunday as years of festering frustrations over the mistreatment of African Americans at the hands of police boiled over in expressions of rage met with tear gas and rubber bullets.

Cars and businesses were torched, the words "I can't breathe" were spray-painted all over buildings, a fire in a trash bin burned near the gates of the White House, and thousands marched peacefully through city streets to protest the death of George Floyd, a black man who died Monday after a white Minneapolis police officer pressed his knee on his neck until he stopped breathing.

His death is one of a litany of racial tragedies that have thrown the country into chaos amid the coronavirus pandemic that has left millions out of work and killed more than 100,000 people in the U.S., including disproportionate numbers of black people.

"We're sick of it. The cops are out of control," protester Olga Hall said in Washington D.C. "They're wild. There's just been too many dead boys." 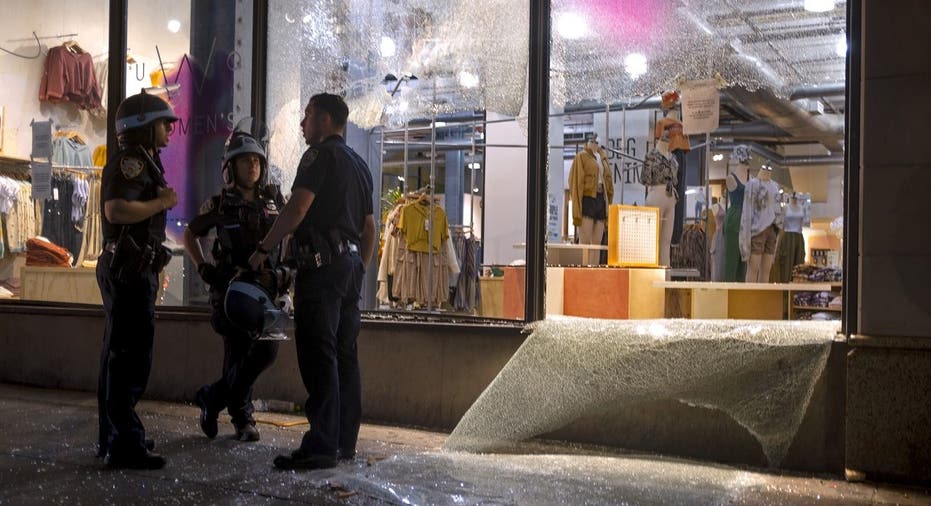 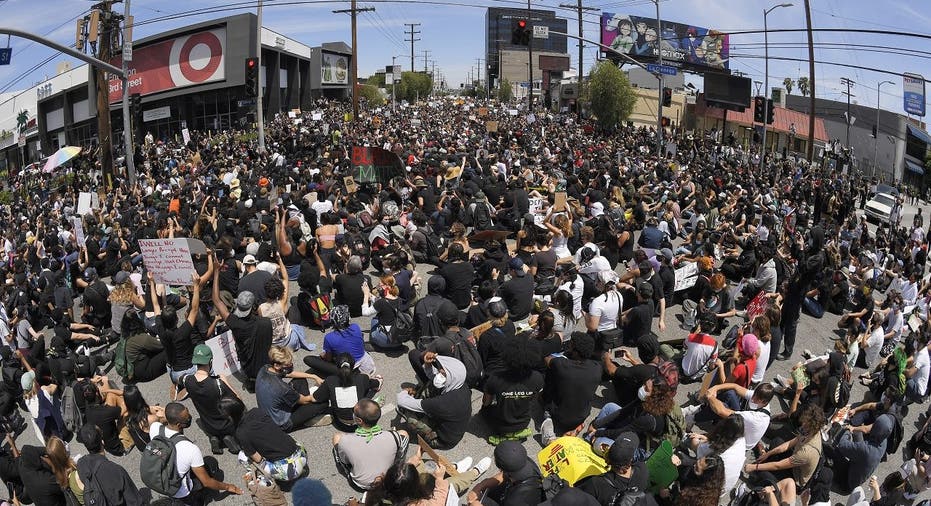 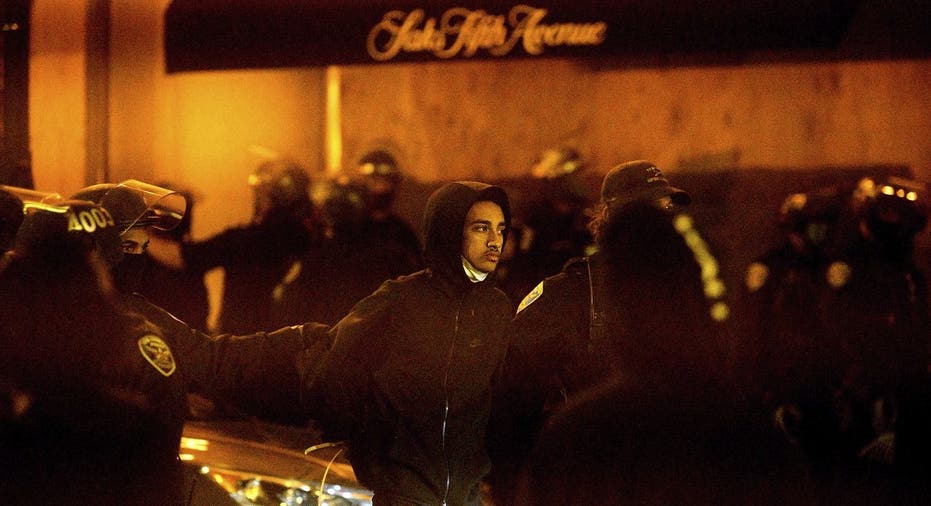 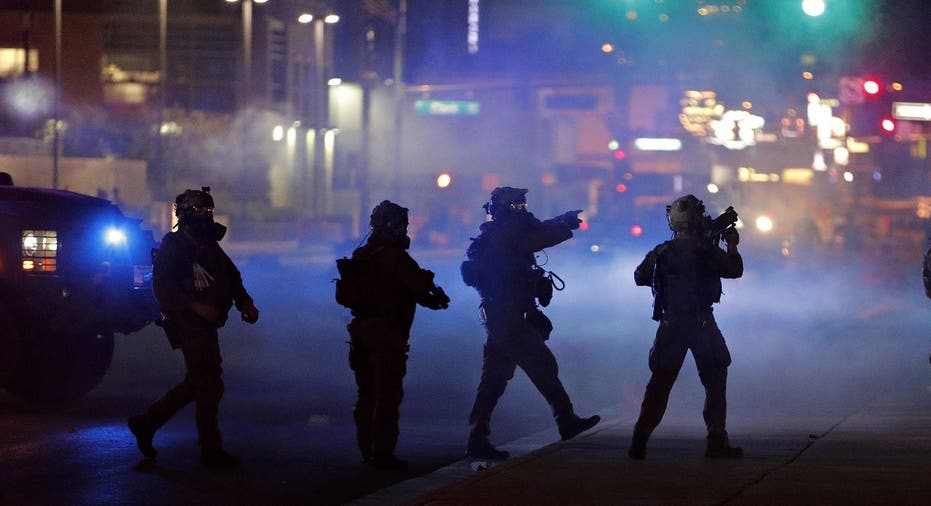 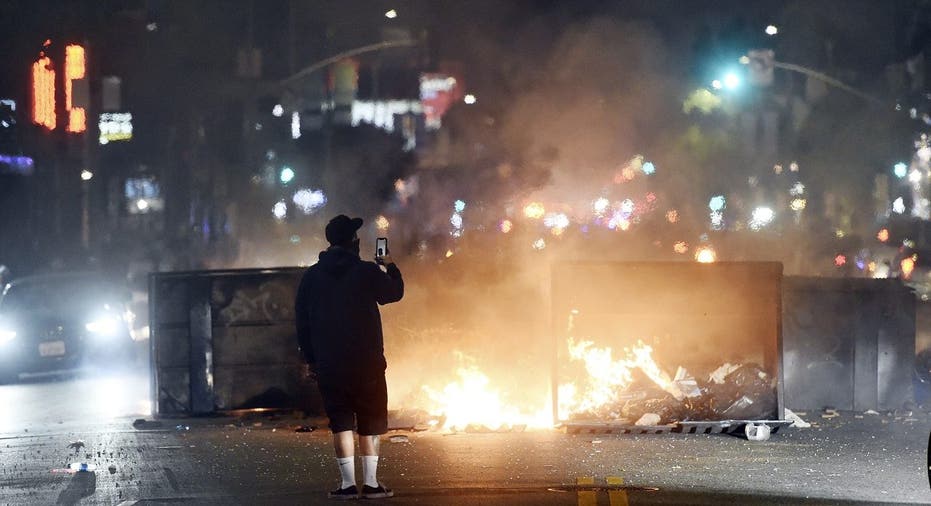 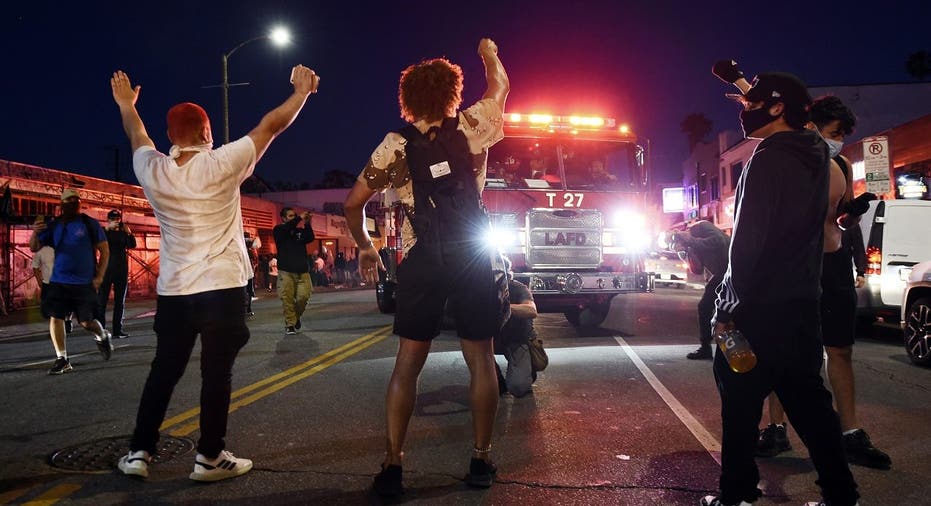 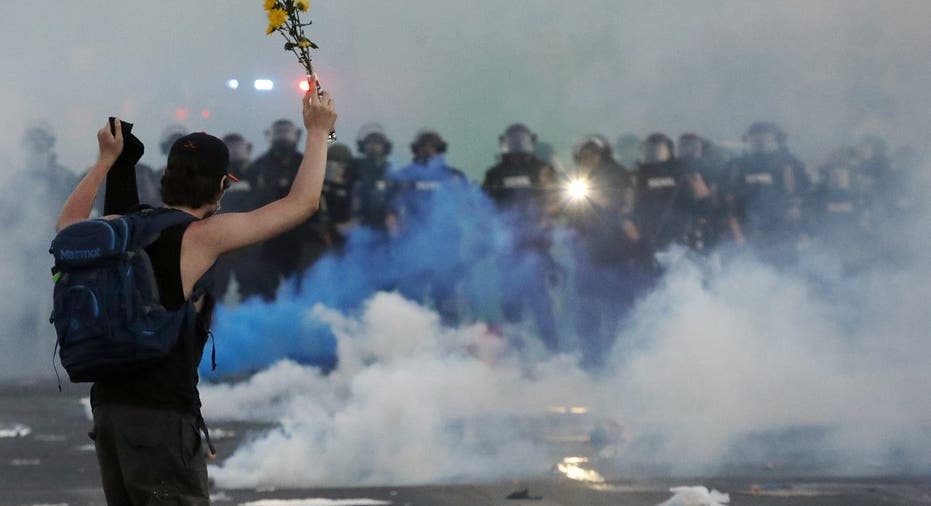 Damage is seen at an Urban Outfitters store near New York’s Union Square Sunday, May 31, 2020, after it was damaged in the midst of a protest highlighting the death of George Floyd, a black man who was in police custody in Minneapolis. Floyd died after being restrained by Minneapolis police officers on Memorial Day. (AP Photo/Craig Ruttle)

People set fire to police cars, threw bottles at police officers and busted windows of storefronts, carrying away TVs and other items even as some protesters urged them to stop. In Indianapolis, police were investigating multiple shootings, including one that left a person dead amid the protests — adding to deaths in Detroit and Minneapolis in recent days.

TARGET CEO RESPONDS TO MINNEAPOLIS PROTESTS: 'WE ARE A COMMUNITY IN PAIN'

In Minneapolis, the city where the protests began, police, state troopers and National Guard members moved in soon after an 8 p.m. curfew took effect to break up protests, firing tear gas and rubber bullets to clear streets outside a police precinct and elsewhere.

At least 13 police officers were injured in Philadelphia when peaceful protests turned violent and at least four police vehicles were set on fire. In New York City, dangerous confrontations flared repeatedly as officers made arrests and cleared streets. A video showed two NYPD cruisers lurching into a crowd of demonstrators who were pushing a barricade against one of them and pelting it with objects. Several people were knocked to the ground, and it was unclear if anyone was hurt. 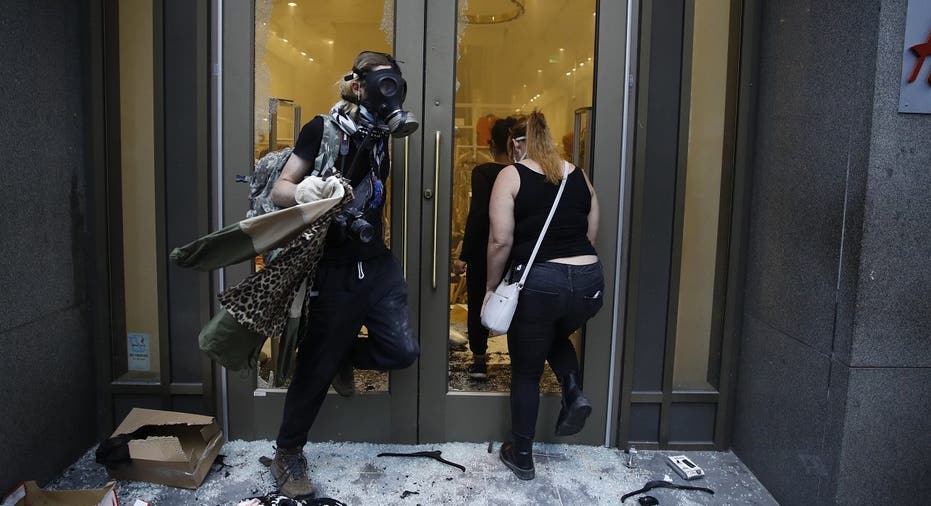 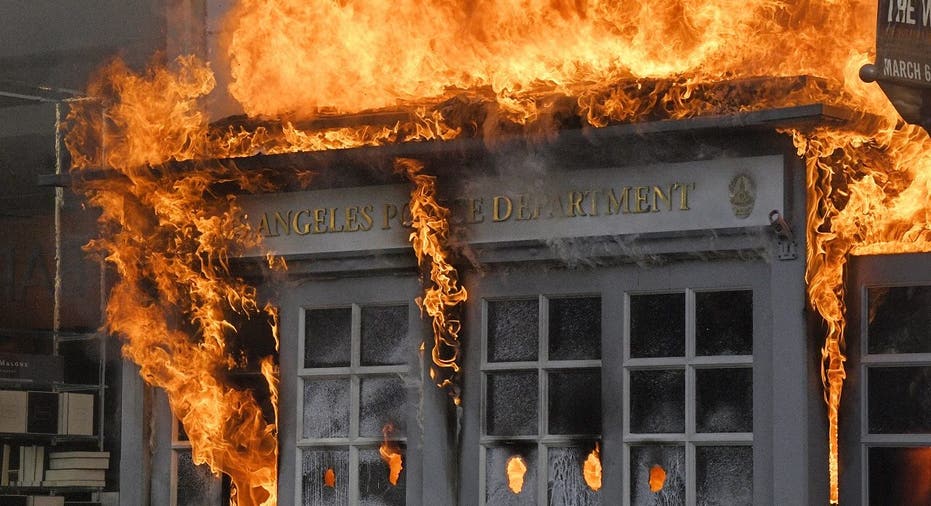 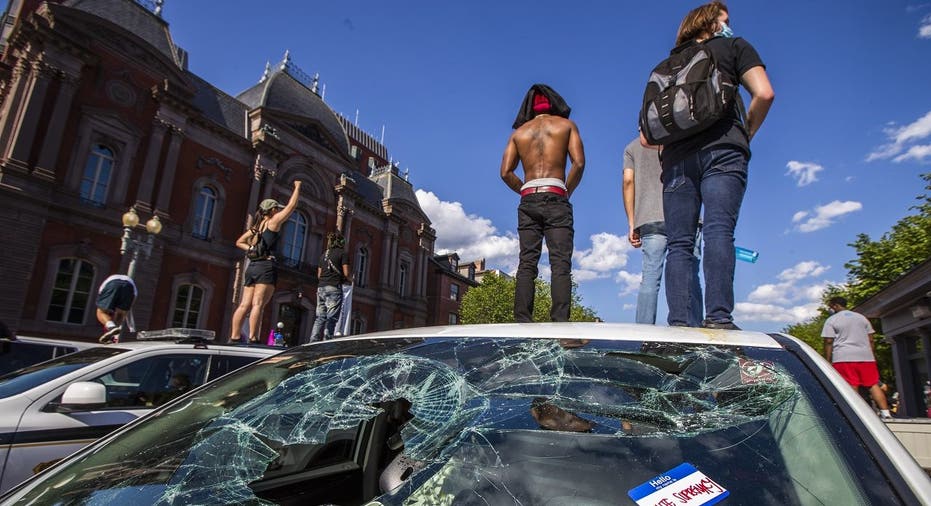 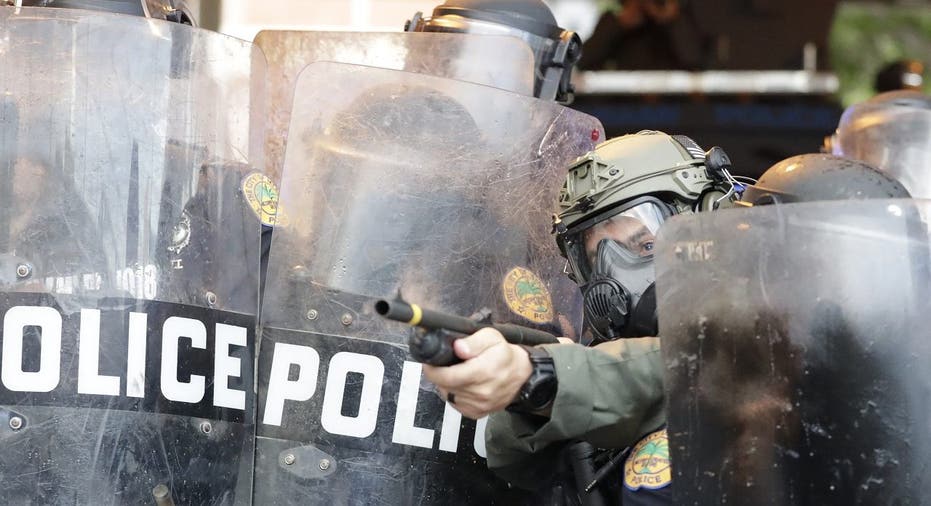 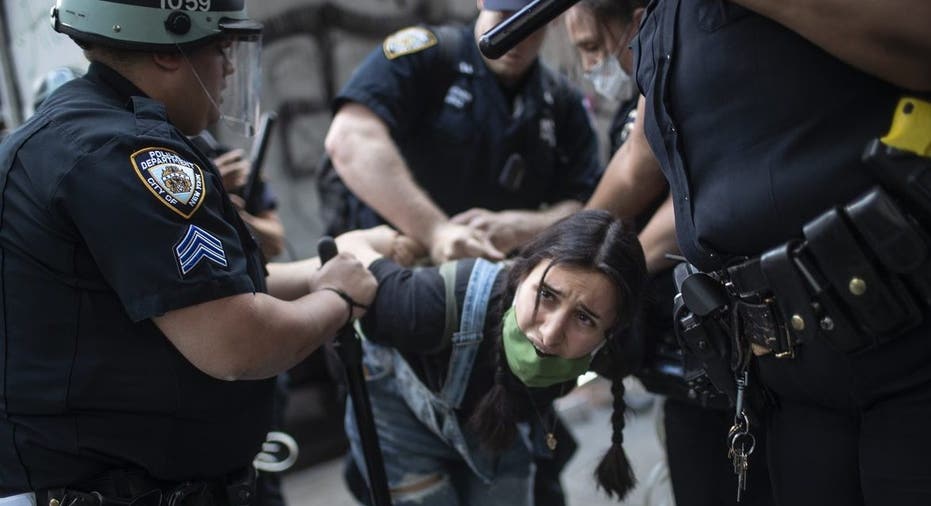 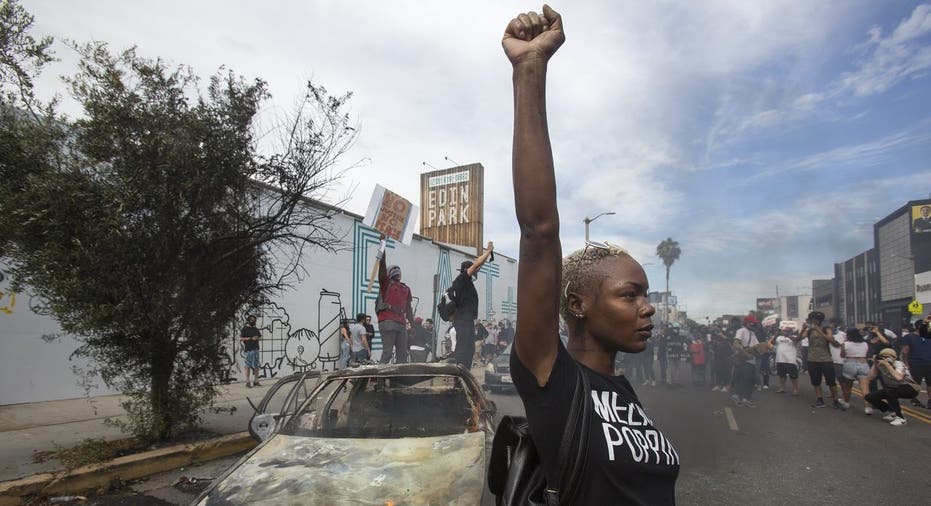 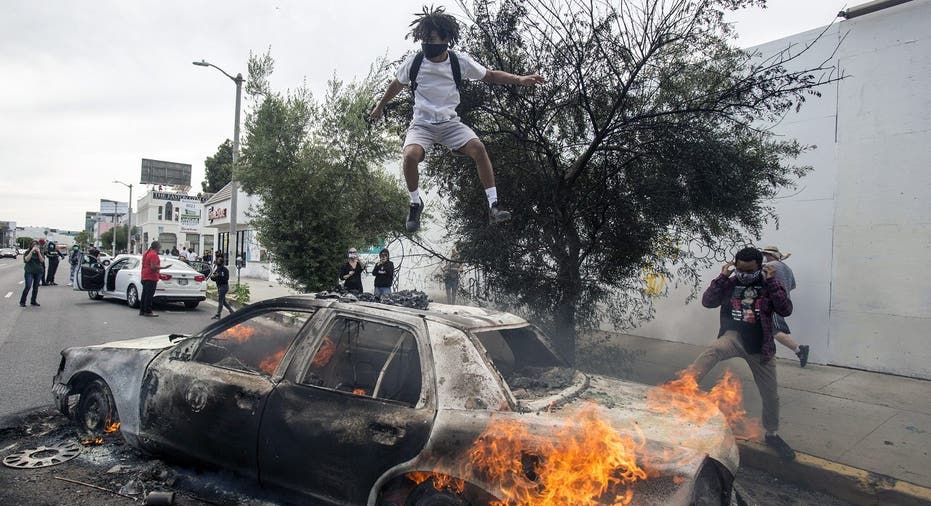 People move past storefronts that have broken glass doors during the Justice for George Floyd Philadelphia Protest on Saturday, May 30, 2020. Floyd died in Minneapolis police custody on Memorial Day, May 25, after an officer pressed his knee into his neck for several minutes even after he stopped moving and pleading for air. (AP Photo/Matt Rourke)

"The mistakes that are happening are not mistakes. They're repeated violent terrorist offenses and people need to stop killing black people," Brooklyn protester Meryl Makielski said.

Few corners of America were untouched, from protesters setting fires inside Reno's city hall, to police launching tear gas at rock-throwing demonstrators in Fargo, North Dakota. In Salt Lake City, demonstrators flipped a police car and lit it on fire. Police said six people were arrested and a police officer was injured after being struck in the head with a baseball bat.

Police have arrested at least 1,669 people in 22 cities since Thursday, according to a tally by The Associated Press. Nearly a third of those arrests came in Los Angeles, where the governor declared a state of emergency and ordered the National Guard to back up the city's 10,000 police officers as dozens of fires burned across the city.

The damage in U.S. cities came as many Americans plan to return to in-person church services on Sunday for the first time in several weeks since the pandemic forced a ban on large gatherings. Pastors in pulpits across the country will likely be urging peace amid the rubble of riots.

HOW CVS, AT&T ARE RESPONDING TO VIOLENT PROTESTS

Trump appeared to cheer on the tougher tactics Saturday night, commending the National Guard deployment in Minneapolis, declaring "No games!" and saying police in New York City "must be allowed to do their job!"

Presumptive Democratic presidential nominee Joe Biden condemned the violence as he continued to express common cause with those demonstrating after Floyd's death.

"The act of protesting should never be allowed to overshadow the reason we protest," Biden said in a statement Saturday night.

This week's unrest recalled the riots in Los Angeles nearly 30 years ago after the acquittal of the white police officers who beat Rodney King, a black motorist who had led them on a high-speed chase. The protests of Floyd's killing have gripped many more cities, but the losses in Minneapolis have yet to approach the staggering totals Los Angeles saw during five days of rioting in 1992, when more than 60 people died, 2,000-plus were injured and thousands arrested, with property damage topping $1 billion.

But not all protests were marred by violence. In Juneau, Alaska,  local police joined protesters at a rally in front of a giant whale sculpture on the city's waterfront.

"We don't tolerate excessive use of force," Juneau Police Chief Ed Mercer told a gathering where most people wore masks and some sang Alaska Native songs.

The show of force in Minneapolis came after three days when police largely avoided engaging protesters, and after the state poured in more than 4,000 National Guard troops to Minneapolis and said the number would soon rise to nearly 11,000.

"The situation in Minneapolis is no longer in any way about the murder of George Floyd," said Gov. Tim Walz, who also said local forces had been overmatched the previous day. "It is about attacking civil society, instilling fear and disrupting our great cities."

Some residents were glad to see the upheaval dissipating.