Bill Gates, former boss of Microsoft, has long been my favourite tech billionaire. Thoughtful, apparently decent, intellectually curious and off-the-scale smart, he's driven not so much by the profit motive as a genuine sense of the social purpose of business and innovation, with their power to improve lives and generate prosperity. 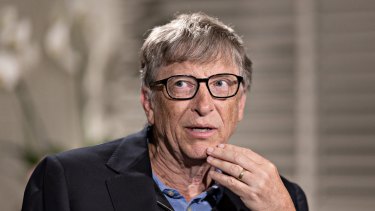 Bill Gates sent a stark warning to the world five years ago about the crippling effects of a global pandemic.Credit:Bloomberg

Now the world's leading public health philanthropist, there are also few business leaders quite as prophetic as Gates. Five years ago, he gave a Ted talk in which he warned about the dangers of a global pandemic. "If anything kills 10 million people, it is more likely to be a virus than a war," he said. "We have invested huge amounts in nuclear deterrents but we have actually invested very little in a system to stop an epidemic. If we start now, we can be ready for the next pandemic."

It scarcely needs saying that, despite the wake-up call of Ebola, his words fell on deaf ears, at least in the United States, Britain and large parts of the rest of Europe. Hindsight is a wonderful thing but cannot, in truth, be offered by way of excuse in this case. There were multiple warnings from the likes of Gates, yet coronavirus still found us woefully unprepared.

On top of a mounting death toll, we also have an extreme economic cost, the like of which is beyond all previous experience in the modern age. Whatever the spending required to make provision for a pandemic, it would have been trivial against the already catastrophic costs of what we are now facing.

Eventually, the coronavirus outbreak will subside, but with an economy that looks as if it has been nuked, and a workforce that has become so used to subsisting on what amounts to a state-provided "universal basic income" that it has lost all will to work. In any case, there may not be that many jobs to go back to.

I'm told that when the UK Treasury modelled the lockdown, it assumed that something like 10 per cent of the economy would be removed. This now looks like an extreme underestimate. And even if this is in itself a reasonable guess at the direct impact, it seemingly fails to take account of spillover effects. Remove one part of the edifice and, like a game of Jenga, the whole thing can come tumbling down. When restaurants close their doors, for instance, pretty soon there will be closures right down the supply chain.

There is also growing confusion, compounded by the mixed messaging of government ministers and officials, about who should be working and who shouldn't. Is all work deemed "non-essential" to cease, even among companies capable of enforcing recommended social distancing in the workplace? That indeed would seem to be the implication of the government's instruction. If all firms were to interpret it in that way, even "essential" work would soon be struggling, such is the economy's degree of interconnectedness.

For economic reasons alone, never mind the psychological strains of an open-ended lockdown, the country therefore needs to know what the exit strategy is. Having got into this hole, it is unfortunately extraordinarily difficult to get out of it again.

The long-term solution is, of course, a vaccine. This could be developed within 18 months, according to Gates, writing in The Washington Post last week. But that's optimistic. A vaccine for the common cold, the holy grail of the global pharmaceutical industry − promising wealth beyond the dreams of avarice for anyone who cracks it − has yet to be found. The same goes for HIV, despite more than 30 years of trying. GlaxoSmithKline's malaria vaccine took many years to develop and is only 30 per cent effective. Most flu vaccines are similarly hit and miss. GSK's shingles vaccine was 15 years in the making.

The industry also seems to be struggling with a reliable antibody test, which would allow citizens to know whether they have already had COVID-19 and can therefore safely return to work with some degree of immunity and confidence that they are no longer going to infect others. Risen like Lazarus from his sick bed, Matt Hancock, the UK health secretary, said last week that none of the tests so far developed had proved reliable.

The bottom line is that neither vaccines nor antibody tests offer much hope of near-term relief from the lockdown. Mass testing for the disease itself continues to seem like the best chance there is of bringing the economy back to life. Once there is sufficient data on who has the disease, so that contacts can be traced and isolated, it ought to be possible to bring the outbreak under control and start lifting the restrictions. The UK government missed the opportunity to get ahead of the virus and is now, at eye-watering cost, having to play catch-up. Blame for this series of blunders and misjudgments will have to await the judgment of future official public inquiries. For many, from officials to ministers and political advisers, they are likely to prove acutely embarrassing.

But all that's for later. No politician can afford to be seen to put the economy before lives while the death toll is rising, and it would indeed be amoral to do so. But once fatalities plateau and start to decline, and there is sufficient data from testing to know the virus has been largely tamed, then the restrictions must start to be lifted, and the uncomfortable truth about this virus − that it overwhelmingly affects the elderly and the vulnerable −will need to be faced up to. Quarantine for these may have to be maintained for a long time, but for the vast majority of people of working age and younger it is already obvious that there is no particular need to protect them from COVID-19. There are many cases now emerging of younger victims, but this happens of nearly all illnesses. Our lives are precarious as well as precious. Unavoidably, there will always be casualties.

Gates, by the way, does not take this view. He believes the lockdown must be maintained for as long as it takes to effectively eradicate the virus, seemingly regardless of economic cost. He worries about its return in a second wave, requiring further economically crippling lockdowns.

But though Gates is perhaps the closest a business leader will ever come to being a saint, I wonder how far he understands human nature. Never mind the economic costs, there will come a natural breaking point in our ability to tolerate the strange and unsettling new world we have been plunged into.