Sorry to be blunt, but anyone who thinks avoiding a second quarter of decline in real gross domestic product means avoiding recession needs a lesson in economics.

It’s clear that Scott Morrison’s $17.6 billion stimulus package – what you might call Kevin Rudd with Liberal characteristics – was aimed primarily at boosting economic activity in the June quarter. Fully $11 billion of the $17.6 billion will be spent or rebated from the budget during the quarter. 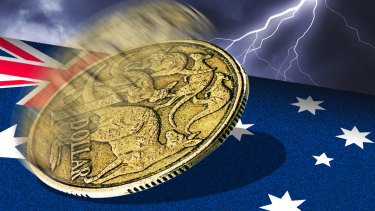 Australia is caught in a global economic storm and a recession is likely – it just depends on how you define one. Credit:Jamie Brown

Half of that will come from the cash-flow rebates to employers, and most of the rest from the $750-a-throw cash splash to social welfare recipients (including parents receiving family payments).

Not all the cash will have been spent, of course, but our and other countries’ experience suggests a lot more will be than you may expect. Former prime minister Rudd’s two cash splashes in 2008 and 2009 are immediately apparent in the retail sales figures of the time.

In any case, to the possible $11 billion you have to add well over $4 billion worth of spending on cars, vans and equipment by small and medium-size businesses, induced by the temporary investment incentive, which will be spent before June 30 but won’t hit the budget until next financial year.

This helps explain why Treasury estimates that the stimulus package will add 1.5 percentage points to whatever other growth or contraction in real GDP we get in the June quarter. Since growth in a normal quarter would be about 0.5 per cent – and, for comparison, Treasury and the Reserve Bank have estimated that the coronavirus will subtract 0.5 percentage points from growth in the present March quarter – this suggests the package stands a good chance of stopping next quarter being a second successive quarter of "negative growth" – contraction. 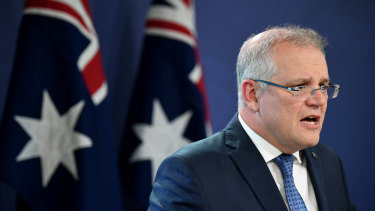 So, recession avoided? No, all that would have been avoided is having the financial markets and the media running around like headless chooks, shouting the R-word – and so frightening the pants off the rest of the populace – just as it was avoided in the March quarter of 2009, after Rudd’s carefully timed second cash splash. 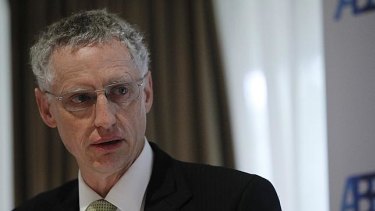 David Gruen, now boss of the Australian Bureau of Statistics – once proposed the most watertight definition of recession: “A sustained period of either weak growth or falling real GDP, accompanied by a significant rise in the unemployment rate.”Credit:Photo: Louise Kennerley

But what anyone who wants to be smarter than the average bear needs to know is that the two-quarters rule makes little sense. It’s no more than an arbitrary rule of thumb with no science behind it. It appeals to the simple souls in the financial markets and the media because it’s simple, objective and (the killer argument) involves minimum waiting.

Only trouble is, for a rule of thumb it doesn’t work well. As the independent economist Saul Eslake demonstrated some years ago, it throws out too many false negatives. That is, it can tell you we don’t have a recession when we do. For instance, two negative quarters separated by even a zero quarter tells you we’re home free. Really? How long will the punters swallow that?

But another problem is that it focuses on the wrong variable – production – when what we really care about is employment and unemployment. Dr David Gruen, now boss of the Australian Bureau of Statistics – once proposed the most watertight definition of recession: "A sustained period of either weak growth or falling real GDP, accompanied by a significant rise in the unemployment rate."

And Eslake has road-tested a different rule, showing it has produced no false signals. It defines recession as "any period during which the rate of unemployment rises by more than 1.5 percentage points in 12 months or less".

Guess what? In the nine months between September 2008 and June 2009, the rate of unemployment rose by 1.6 percentage points to a peak of 5.9 per cent, but then fell back to 5.1 per cent over the following year. So we did have a recession, but it was so short and mild the punters didn’t notice it.

And taming recession so successfully brought Labor no thanks at the ballot box.