We all know that the economic consequences of the pandemic have been enormous. On a comparatively optimistic view of the effectiveness of the rollout of vaccines, the OECD puts the total global cost over two years at $US6 trillion ($8 trillion) – amounting to about 7 per cent of global GDP.

If policy had been better, could this loss have been reduced?

Naturally, there is a lively debate about the polices employed to counter the virus via lockdowns and other restrictions. It is legitimate to ask whether the virus could have been contained at lower economic cost, but my concern here is different. Given the policies adopted by governments to contain the virus, could the macroeconomic policy response have been more effective?

The extent of policy action across the world has been astounding. Interest rates have been slashed to zero or below more or less everywhere, and central banks have massively expanded their balance sheets by buying bonds. But the main focus has quite rightly been fiscal. Including loans and guarantees, fiscal support packages have amounted to about 12 per cent of global GDP. This compares with roughly 2 per cent in 2009 following the global financial crisis. 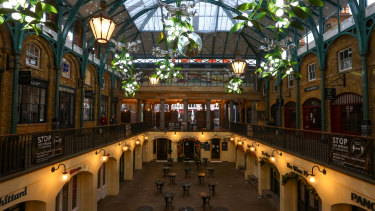 There have been marked differences between countries. Among major economies, Germany, Italy and Japan have given the most support at over 30 per cent of GDP. At the other end of the spectrum, Russia and Indonesia have delivered packages of only 3-4 per cent. On the whole, support packages have been smaller in the emerging markets. China's packages so far amount to about 5 per cent of economic output.

In the US and Canada, the bulk of support has consisted of measures that directly boost aggregate demand. In Italy and Germany, by contrast, the focus has been on financial assistance to companies.

There has been a marked difference with regard to labour market policies. In Europe there has been much greater emphasis on protecting jobs through the introduction of short-working schemes or government-sponsored furloughs. This approach has the benefit of preserving specific skills, keeping otherwise viable firms afloat and avoiding bankruptcies.

By contrast, the support package in the US has focused less on protecting jobs and more on supporting workers' incomes, and thereby aggregate demand. Between April and July, unemployment insurance payments were increased by $US600 a month and the coverage for employment insurance was expanded. Most strikingly, cheques of $US1200 were sent to all households with annual incomes below $US75,000.

It is notable that although fiscal support programs have caused a massive spike in government borrowing and an accompanying surge in debt ratios, there has been little criticism from the usual fiscal hawks.

In particular we have heard very little from the Austrians compared to the aftermath of the financial crisis.

I refer not to the population of the small European country but rather to the group of economists who follow an earlier generation of thinkers who hailed predominantly from that country. They believed that just about all forms of government intervention in the economy were wasteful and that recessions should be allowed to run their course. After the last crisis, quite a few Austrians argued that not only should banks be allowed to go bust but that the macroeconomic consequences of this should be allowed to play out.

Perhaps it is because bankers are widely perceived to be fair game, contrasted with the much greater number of blameless families and businesses hit by COVID. Or perhaps it is because economists were pretty shaken by the financial crisis experience and rediscovered their Keynesianism. It seems now to be widely believed that in the wake of the crisis, governments moved to tighten fiscal policy too quickly.

Whether or not this is true, one key difference of overwhelming importance is that interest rates are now much lower. Not only has monetary policy come close to the end of the road in regard to its effectiveness, but the short-term cost of fiscal expansion has been dramatically lower than it was in 2009.

Does this mean that governments should have done even more? Perhaps. But we do not yet know how strong the revival of private sector demand will be once the pandemic is over, nor how difficult the public finances will be once the economy has recovered and interest rates are higher. My suspicion is that the extent of the UK government's support packages has been just about right. We can afford to go a bit further but the more we do so, the greater the future risks.

In any case, given the lockdown restrictions, I doubt whether more generous direct support of consumers – perhaps in the form of an American-style one-off payment – would have done much to strengthen aggregate demand. The money would have surely gone mainly into household savings, thereby increasing the potential overhang of purchasing power – which may yet cause an inflationary worry in a few years' time.

Interestingly, there is an Austrian aspect to this story after all. It doesn't concern aggregate demand so much as the structure of the economy. The danger of governments devoting their support packages to protecting existing jobs and preserving existing companies is that this smothers normal economic adjustment.

This danger is particularly great now for, much more so than in a normal recession, the coronavirus catastrophe is surely going to radically reshape the economy. We can speculate as to what the new shape will be, but no one can be remotely sure about it.

This poses acute problems for policy. After the economy has recovered, governments will suffer their own version of long COVID – the agonising decisions stretching over many years about how much, if any, support to give to businesses and whole industries that have been left high and dry in the post-COVID economy.

For unique insight into the world's economic issues, sign up to our Economic Intelligence newsletter, by Ambrose Evans-Pritchard and Jeremy Warner