Fear closed the world in on itself as nations, from the U.S. to much of Europe and Latin America, took measures to shield citizens from the coronavirus infection.

That meant shutting borders, airports and, in France, its cafes and restaurants. Spain declared an emergency. Italy continued to be battered, reporting 175 new deaths to raise its total to 1,441.

Confirmed cases for China and South Korea continue to show signs of stabilizing.

Subscribe to a daily update on the virus from Bloomberg’s Prognosis team here.

Click VRUS on the terminal for news and data on the coronavirus and here for maps and charts. For analysis of the impact from Bloomberg Economics, click here. To see the impact on oil and commodities demand, click here.

New Jersey reported its second death from the coronavirus, a woman in her 50s who was being treated at CentraState Medical Center in Monmouth County. The state has 69 positive tests, up from 50 the day before.

South Korea reported 76 new coronavirus cases in 24 hours, an all-time low since Feb. 20, when the country saw a surge of over 500 in four days.

The country’s total tally stands at 8,162, and marks the third day in a row in which the number of released patients are greater than the number of newly-confirmed cases overnight. A total of 75 deaths in the nation have been reported.

Spaniards’ freedom of movement will be significantly limited for the next 15 days under the state of emergency declared by Prime Minister Pedro Sanchez. The wife of the prime minister has tested positive for the virus, El Pais reported.

The Spanish government will take full control of administration nationwide, Sanchez said in an address. People will only be allowed to leave their houses in specific circumstances, he said.

Ronna Romney McDaniel, chairwoman of the Republican National Committee, has been tested for the coronavirus after experiencing fever and flu-like symptoms.

“She went to her local hospital in Michigan for treatment,” RNC communications director Michael Ahrens said in a statement posted on Twitter.

McDaniel has blaming Democrats for using the virus as a way to spread panic and undermine President Trump.

France is shuttering restaurants, cafes and shops deemed non-essential, following in the footsteps of neighboring Italy to curb the new coronavirus’s spread.

“Too many people still go to cafes and restaurants,” French Prime Minister Edouard Philippe said at a press conference in Paris on Saturday. Philipe “We must show more discipline.”

At least 4,500 people in France have contracted the virus, double from 72 hours ago.

Canadians are being urged to avoid non-essential travel. “New restrictions may be imposed with little warning.” Global Affairs Canada posted on its travel advisory website. “Your travel plans may be severely disrupted and you may be forced to remain outside of Canada longer than expected.”

Norway will shut all airports, ports and border crossings, calling in the army to help enforce what appears to be the nation’s closure to the outside world, Prime Minister Erna Solberg announced.

The nation may also seek infection control gear from China.

Countries around Europe, from Spain to Russia, are announcing measures to restrict the movement of people both inside and outside their nations.

The Food and Drug Administration is encouraging licensed pharmacists and physicians to make their own batches of hand sanitizer to combat widespread shortages. The agency is worried that home-made concoctions are not as safe to use as what pharmacists and doctors could make, using high-quality ingredients and at least 60% alcohol.

Hand sanitizer has mostly disappeared from physical stores around the nation as well as from most on-line retailers.

Alitalia said it will immediately require all passengers to wear facial masks onboard flights. The masks must be provided by the passengers themselves, a difficulty given the shortage in Italy, the epicenter of the coronavirus outside of China.

New York City’s hospitals, among the best in the world, may still not be ready for the coronavirus outbreak, according to many health care experts.

“We are not prepared to deal with a rapid and severe surge of patients — we’re just not,” said Christopher M. Tedeschi, a longtime emergency physician and assistant professor at the Columbia University Medical Center.

President Donald Trump said he took a coronavirus test and noted travel will be banned from the U.K. and Ireland. The rest of Europe falls under an essential no-entry policy announced last week.

Trump said he took the virus test on Friday night, and had his temperature taken early Saturday before appearing at a White House news conference. His temperature was “totally normal,” he said as he left the briefing room.

He said he expects results back in “a day or two.”

The U.S. added Great Britain and Ireland to its current international travel ban, effective late Monday. U.S. citizens flying home will still be able to enter, but will be checked at one of 13 airports, and if they show symptoms of the virus will be asked to self-quarantine for 14 days, Vice President Mike Pence said. 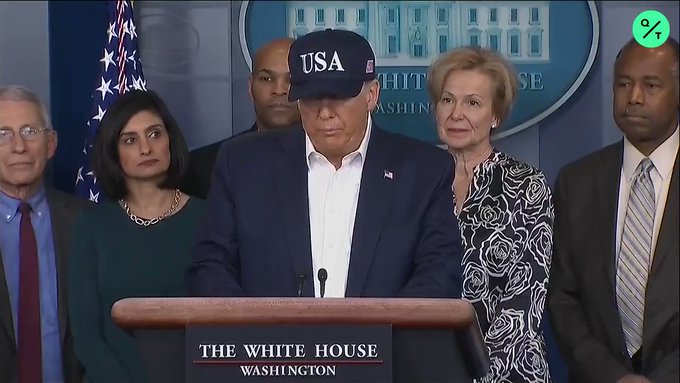 The White House is now checking the temperatures of anyone coming in close contact with President Donald Trump and Vice President Mike Pence, a deputy press secretary said.

The moves are being made “out of an abundance of caution,” Judd Deere said in an emailed statement.

Trump on Friday said he “most likely” will be tested “fairly soon” after a Mar-a-Lago meeting last weekend with several people — including members of an official delegation from Brazil — who later fell ill.

Belgium is telling citizens not to travel abroad and warned that the risk of being stranded is “very high.” The foreign ministry said it can’t guarantee travelers will be able to return home as countries around the world start to close borders.

British Prime Minister Boris Johnson is considering a ban on large public gatherings, which could come into force next weekend, an official said. He is under pressure from some medics and politicians to take a more aggressive approach to fighting the virus.

Berlin is suspending some imprisonments to reduce the risk of coronavirus infection and save medical resources, according to German news agency DPA. Authorities will delay jail time by four months for unpaid fines, DPA said.

Countries across the Middle East shut down schools and tourist attractions.

Egypt will close schools and universities for two weeks and Oman’s close for a month, according to reports from state-run media. Abu Dhabi will shut tourist attractions and cultural sites, including a branch of the Louvre museum, until the end of the March.

The United Arab Emirates temporarily suspended issuance of all visas, excluding diplomats, according to its official news agency, WAM.

In Kuwait, four more people have been infected with the virus, bringing the number cases to 104.

Nine players in Italy’s top soccer league, Serie A, tested positive for the coronavirus, according to daily Gazzetta dello Sport. Games have been suspended until at least April 3.

Italy’s Health Undersecretary Pierpaolo Sileri has also been confirmed with the illness. He said he’s been in isolation and working remotely since he’s had symptoms.

European countries added border restrictions to curb the spread of the virus across the continent.

Russia’s Prime Minister Mikhail Mishustin signed orders Saturday to close the border with Poland and Norway for most foreign citizens from March 15. Switzerland said it would turn away travelers from Italy, deemed a “high-risk country.” Several nations also moved to implement border checks and bar cruise ships from their ports.

Greece stopped all flights to and from Italy, the second-worst affected nation after China. Georgia closed its border with Armenia and Azerbaijan. Portugal said cruise ships wouldn’t be able to disembark, as did Montenegro.

— With assistance by Ian Fisher, Lynn Thomasson, and Marthe Fourcade