The long-term West Texas Intermediate (WTI) crude oil futures contract has reached support at the 1986 and 1998 lows near $10, likely marking the end of a vertical plunge that started after Saudi Arabia and Russia started a price war in March. Their timing was atrocious, with countries worldwide shutting down as a result of the coronavirus pandemic, which in turn generated a massive supply glut. Long-term implications of the crash will be severe, with exploration, production, and refining bankruptcies forcing many of the 11 million U.S. energy workers onto the unemployment lines.

Equity traders piled into the U.S. Oil Fund LP (USO) during the crash but didn't book short sale profits near real-time loss percentages because the fund is constructed from front month contracts but begins rolling them into the next month two weeks prior to expiration, which in this case took place on April 21. This process generated steep contango due to the wide spread between contract months, eroding gains while exacerbating losses. The fund just changed this structure and will now hold 20% exposure in second month contracts to lower volatility. 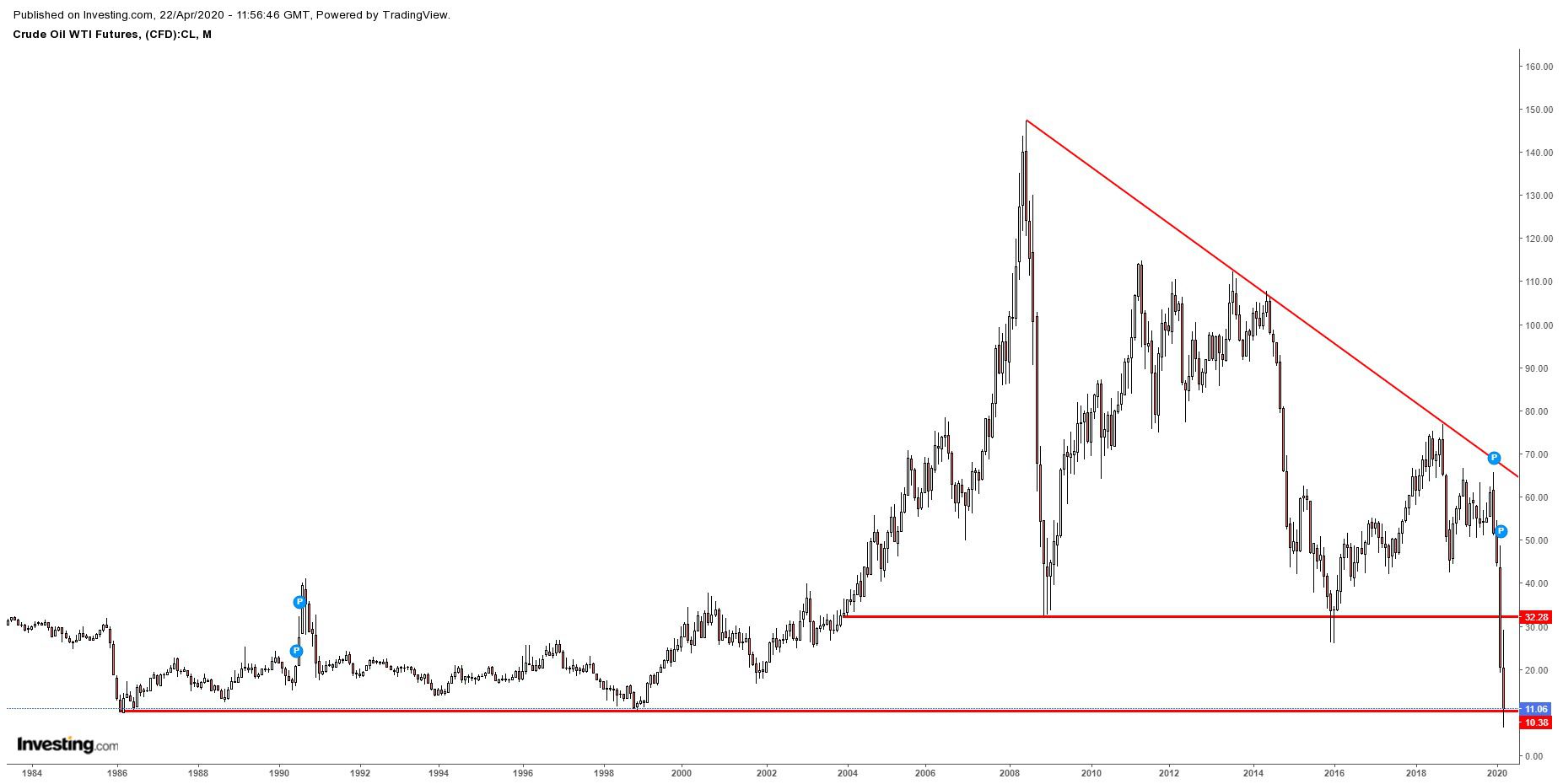 The chart for the long-term WTI futures contract is remarkably well organized, with a 40-year trading floor near $10 and a massive descending triangle that drew a perfect trendline of lower highs into October 2018, when it topped out for the last time in the mid-$70s. Sell-offs in 2008 and 2015 found horizontal support in the low $30s, marking obvious resistance after the world goes back to work and energy demands picks up once again.

Given the massive size of this pattern, it's entirely possible that crude oil won't pierce the $40s again for years or decades, with a combination of lower demand and the inevitable transition into alternative energy sources weighing on the contract. It's something that new longs should keep in mind in coming months because many investors believe that prices will snap back to prior levels once the pandemic runs its course. 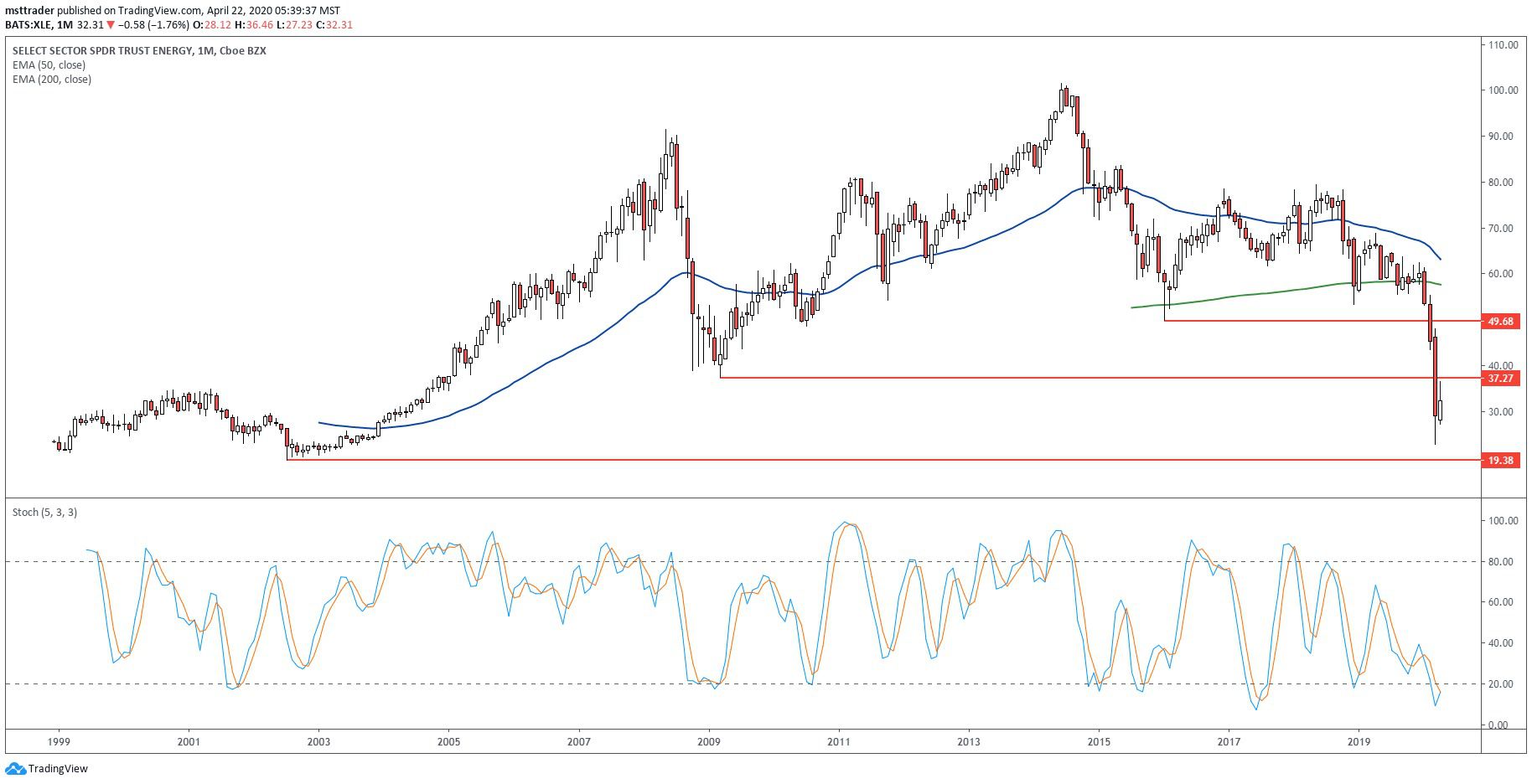 The SPDR Select Sector Energy ETF (XLE) holds $8.3 billion in assets, making it the largest energy equity fund. This week's drama barely shows on the short-term price chart because the fund is more closely levered to the pandemic at this time than the futures markets. This type of divergence is normal during periods of high volatility, while energy stocks tend to move in lockstep with futures contracts during periods of low volatility.

The fund came public at $23.31 in December 1998 and entered a brief decline that found support at $21.09 about three months later. An uptick into the new millennium topped out in the mid-$30s in October 2000, giving way to renewed selling pressure that undercut the prior low before posting an all-time low at $19.38 in October 2002. It bounced strongly through mid-decade, breaking out to a new high in 2005.

The strong uptrend stalled in the low $90s in 2008, yielding a 59% haircut during the economic collapse. Committed buyers finally returned in 2009, ahead of an April 2014 breakout that posted an all-time high at $101.52 in July. The breakout failed just three months later, carving a painful downtrend that found support near $50 in the first quarter of 2016. The subsequent bounce stalled in the $70s one year later, marking a barrier that denied a 2018 breakout attempt.

The fund violated 2016 support in February 2020 and 2009 support less than two weeks later, highlighting extreme bearishness that should limit gains during an inevitable recovery wave. Ominously, price action since the March 18 low has carved a bear flag pattern, raising the odds that the fund will test and break short-term support. In turn, that would expose additional downside into and through 2003's all-time low in the upper teens.

Recovery from the crude oil crash will likely take years, and there are no guarantees the futures contract or energy stocks will rally back to prior highs.

Disclosure: The author held no positions in the aforementioned securities or their derivatives at the time of publication.