When shoppers in England venture back on to the high street in 10 days’ time, they will emerge into a very different retail universe to the one they remember.

Instead of wandering round clothes shops, they will be asked to make browsing appointments in advance. Instead of bustling restaurants, they will find distanced dining zones on the street where cars used to be. But instead of bright yellow warning signs, some will find floral stencils designed to remind them to keep their distance – without making them so nervous they go straight home.

As retailers prepare for the uncertainty of non-essential shops in England reopening on 15 June, many have concluded that innovation is their only chance of survival.

Which UK shops are reopening and when as Covid-19 lockdown eases?

But at the same time as they plot their immediate steps to woo shoppers back, others are hopeful that the coronavirus crisis could prompt a deeper reimagining of how we spend our lives as consumers – and trade identikit retail parks and soulless town centres for a utopian new vision of a community-led “15-minute city”.

Amid concerns that the measures required to ensure a safe reopening could leave people fearful, town centres are experimenting with different options to encourage shoppers to venture out.

In Leamington Spa, rather than forbidding red or yellow warning signs, the public will be reminded of 2m physical distancing requirements with stencils of flowers to reflect the town’s horticultural history. “We wanted pavement graphics that would be less authoritative and more welcoming,” Stephanie Kerr, the local BID’s executive director, said when the signage launched. 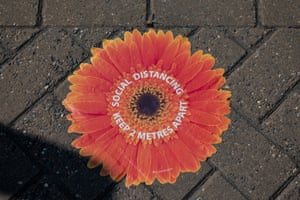 She said a pilot found children were more willing to abide by the rules because the imagery was “fun and interesting.”

Turner said other innovations shoppers could expect to see included being asked to make appointments to browse at clothing shops to avoid overcrowding. Meanwhile, restaurants in cities including Cardiff and Bristol will share socially distanced tables outside and ask customers to order and pay via an app to avoid having to hand card readers or cash back and forth.

With no official advice on how shops should calculate the number of customers they can accommodate, a new study from Manchester Metropolitan and Cardiff universities suggests that 10-12m² is necessary per person depending on location.

That has led to calls for more towns and cities to consider temporarily pedestrianising busy shopping streets, because overlapping queues on pavements could cause chaos.

Andrew Goodacre, the chief executive of the British Independent Retailers Association, said the current guidance was “very subjective”. He added: “You may have very similarly sized shops with different numbers allowed in – and then what does the consumer feel? If there’s a lot of variation it could create tension on the high street.”

With so many variables in play and little clarity about how consumers will respond, most retailers are yet to set out their plans for reopening. Ronald Nyakairu, a senior analyst at the Local Data Company, said that of 4,000 multiple branch retailers in the country, only 20 or 30 had announced their intentions so far.

“The questions we’re being asked by clients are changing all the time,” he said. “I don’t think it’s ever been harder to be a retailer.”

Lockdown rules: what is allowed in England, Scotland, Wales and Northern Ireland

With little concrete information available, retailers must assess whether their stores are in areas that are likely to see a return of significant shopping footfall. That means smaller outlets considering whether they are near a major “anchor” such as a supermarket or people’s homes, says Nyakairu. Those in areas with an older population, or in leisure-focused areas with lots of bars and restaurants, may face a longer wait.

There have been warnings for some time that without more “experiential” retail or reasons for people to travel to a high street other than just shopping, these central points of Britain’s communal life will wither in the face of online retail.

Despite the many reasons for pessimism, though, there are those who hope that the crisis will help bring about an overdue change in our high streets and shared spaces – and open the way to an almost utopian future.

Finn Williams, the co-founder of Public Practice, a social enterprise aimed at improving the built environment, points to the Parisian concept of the 15-minute city – locally self-sufficient communities with everything from groceries to parks and workplaces within a walk or bike ride of home.

“There’s no going back,” he said. “So we have to think not just about what happens in town and city centres but what happens closer to home. Town planning traditionally works by zoning stuff together – but now there is a need to mix things up.”

He argues that communities could be boosted as bigger companies focus more on online retail and allow “really local neighbourhoods” to spring up with a bigger purpose than consumerism. “You can’t expect people to come from miles around,” he said. “Hopefully by scraping away a layer of the less useful retail, you get to some of the core functions of a high street that are deeper, and about the social and civic purpose.”

Prof Cathy Parker, one of the authors of the study, said that in her home town of Macclesfield, an agile response to extraordinary circumstances had been made harder by centralised decision-making from big chains. She wants to see companies hand responsibility on everything from stock to opening hours to window displays to local staff, who understand the specific dynamics at work.

But she, too, argued that a more hopeful future could emerge from the crisis.

“The new partnerships that have been formed, the new businesses that people seem to value, how they want to walk and cycle more, air quality, greenery – these are things that people are going to want from their towns and high streets after it’s all over,” she said. “They don’t want to go back to their stressed lives, and horsemeat burgers. We have to make sure that as this regeneration happens, something really good comes out of it.”