Mike Ashley has issued a public apology after his spat with the government to try to keep his Sports Direct chain open when non-essential businesses were ordered to close.

Ashley’s Frasers Group, which includes House of Fraser and Evans Cycles, had intended to keep Sports Direct open as other non-essential retailers closed, on the basis that selling sporting and fitness equipment made the company a vital asset as Britons were forced to stay at home. He eventually bowed to government pressure and shut his stores on Tuesday.

UK lockdown: what are the coronavirus restrictions?

People in the UK will only be allowed to leave their home for the following purposes:

Police will have the powers to enforce the rules, including through fines and dispersing gatherings. To ensure compliance with the instruction to stay at home, the government will:

Parks will remain open for exercise, but gatherings will be dispersed.

“I am deeply apologetic about the misunderstandings of the last few days,” Ashley said in an open letter. “Given what has taken place over the last few days, I thought it was necessary to address and apologise for much of what has been reported across various media outlets regarding my personal actions and those of the Frasers Group business.”

In its attempt to stay open, the company went as far as lobbying Boris Johnson directly with a public tweet after the prime minister on Monday ordered that all “non-essential” stores should close. 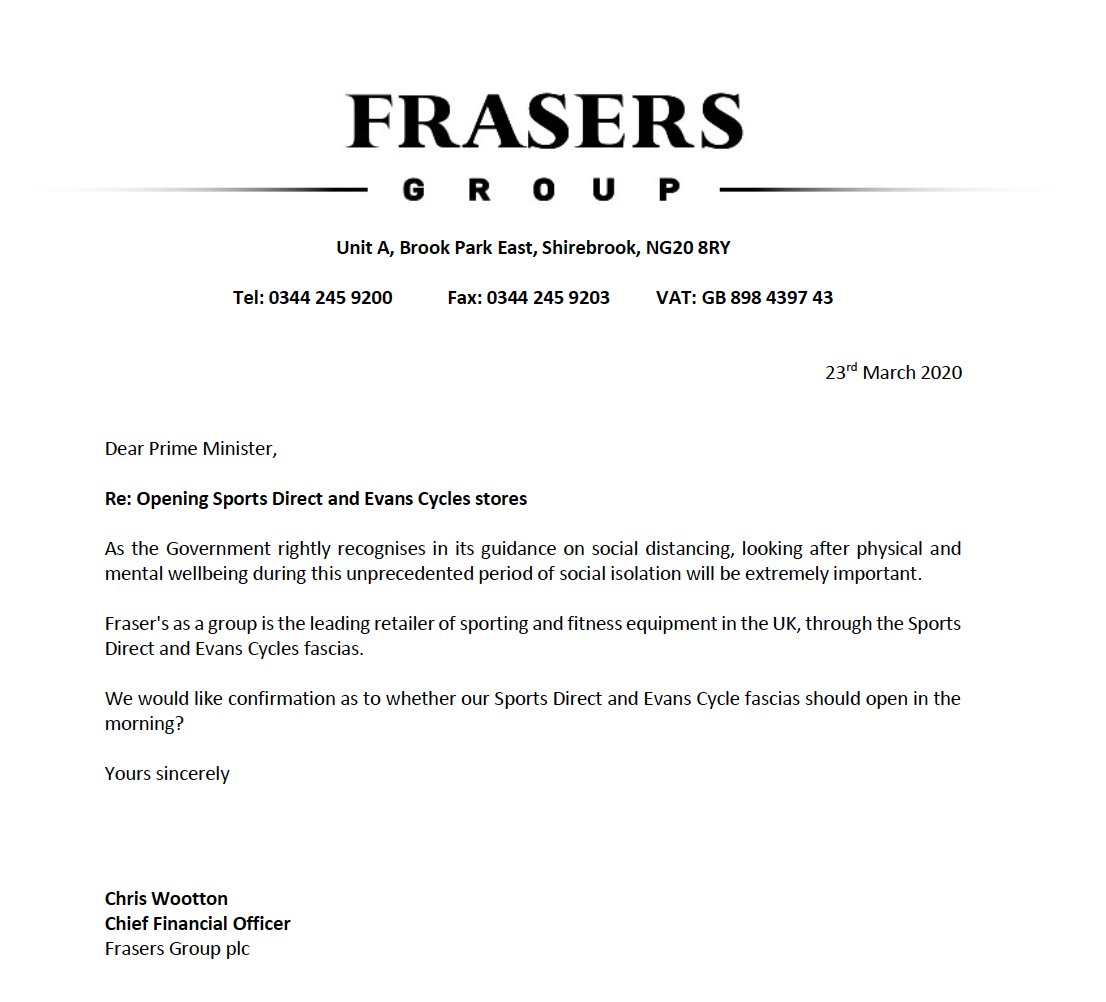 Michael Gove, the Cabinet Office minister, told BBC Radio 4’s Today programme on Tuesday that Sports Direct had made the wrong call and that its stores should not be open. Its management had “got the message”, Gove added, after Sports Direct agreed to close stores.

Ashley said on Friday: “Our intentions were only to seek clarity from the government as to whether we should keep some of our stores open. We would never have acted against their advice. In hindsight, our emails to the government were ill-judged and poorly timed, when they clearly had much greater pressures than ours to deal with. On top of this our communications to our employees and the public on this was poor.”

Ashley said that the company had since sought to make amends by offering its entire fleet of lorries to help deliver medical equipment and supplies for the NHS and all key workforces across government. “We will help wherever possible,” he said.

Ashley also acknowledged his workers, some of whom were still made to come in on Tuesday – after the government shutdown – for tasks such as stocktaking.

“I would especially like to thank my Frasers Group employees, who have stood by the business in difficult times and are doing so currently,” he said. “We are working very hard to save our business. We will learn from this and will try not to make the same mistakes in the future.”

The government subsequently added bike shops to the list of essential businesses that can stay open. Ashley’s Evans Cycles is considering reopening its doors as a result.