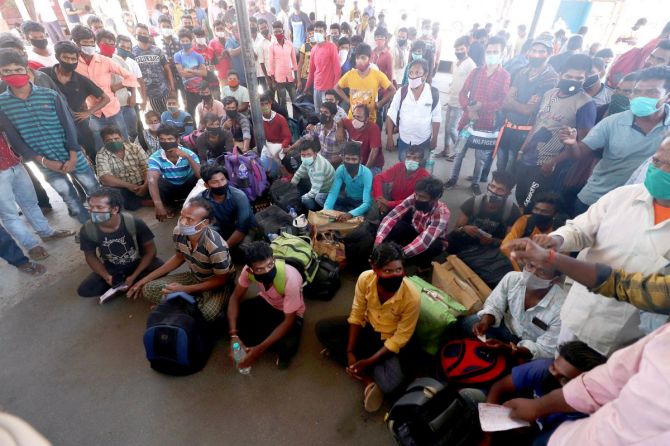 The unemployment rate has moved into double-digits. This is not normal for India.

The only time the unemployment rate lurched into double-digits was when India was shut down by a stringent nationwide lockdown during April and May 2020.

There is no similarly draconian lockdown now although there are several local restrictions that restrain mobility in varying but distinctly milder degrees.

The double-digit unemployment rate seen in recent times indicates that even these restrictions are taking a toll on the economy.

Evidently, the last two weeks have seen a sudden spike in the unemployment rate.

Weekly estimates are useful early indicators of the possible estimate for a month well before the month is concluded. The unemployment rate was 8 per cent in April 2021.

Gleaning the weekly rates during the current month, it seems that May 2021 could end with an unemployment rate of over 10 per cent.

The 30-day moving average is like a monthly estimate but it is generated every day using data of the preceding 30 days.

Urban unemployment entered the double-digit zone on May 6 when its 30-day moving average rate was 10.2 per cent. It has risen steadily since then. By May 20 it touched 12 per cent and as of May 23 it was 12.7 per cent.

In contrast, the rise of unemployment in rural India is a more recent phenomenon. Its sharp ascent began in May.

Employment in rural India in April received substantial support from the central government’s MGNREGS. The scheme employed 341 million during the month. This was the highest since July 2020.

The steady and substantial rise in the unemployment rate in May 2020 is likely to be the result of loss of employment during the month — some people who had employment already are losing it.

And so, the rise in the unemployment rate reflects a fall in employment during the month. This could be stressful.

Employment has been falling since January 2021. It had fallen by about 10 million between January and April 2021. May 2021 could see a similar fall.