(CNN Business)Josh Souder has slept only three or four hours a night since California issued a statewide stay-home order. Those hours are his only exhausted respite in the daily panic of losing thousands of dollars a day at his restaurants.

“It’s just been a completely life altering experience from start to finish — and within a week,” said Souder, speaking to CNN Business from The Drunken Crab restaurant in North Hollywood, California. “I mean, this is unbelievable. I’m worried about having a heart attack to be perfectly honest with you.”
Souder estimates at the rate of loss at his restaurant, it will lose $250,000 a quarter, which forced him to lay off 75 employees in one day. 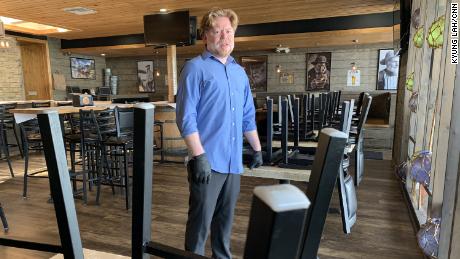 Souder’s restaurant is a microcosm of the coronavirus’ ravaging of an industry and a sign of what awaits other sectors of the US economy.
In an open letter to President Donald Trump, House Speaker Nancy Pelosi and Senate Majority Leader Mitch McConnell, the National Restaurant Agency estimated a drop in sales by “$225 billion during the next three months, which will prompt the loss of between five and seven million jobs.”

Souder, director of operations at IE Entertainment Group — which owns The Drunken Crabs in North Hollywood, California, and Santa Barbara, California — is now one of a handful of workers at the main restaurant, mopping floors, taking calls and fulfilling take-out orders. He doesn’t mind the work — he just wants to pay the 75 employees to do their jobs again. 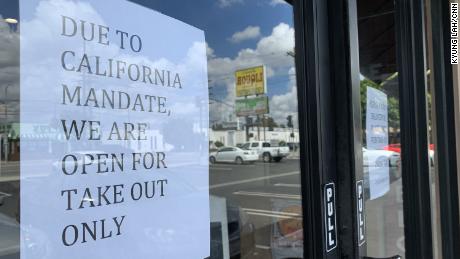 “At first you’re thinking about them. I feel horrible for them,” said Souder, explaining the heartache of firing beloved staff. “And then they have to go and tell their family, ‘I just got laid off.'”
One of the staffers Souder was forced to let go was Jay Bocken, the general manager at the North Hollywood restaurant.
“I called my wife over the phone and said, ‘Honey, I’m on my way home.’ And she just pretty much immediately knew,” said Bocken.
Bocken, who is married and the father of two young boys, filed for unemployment the same day and has yet to hear back. Since his entire industry has ground to a halt, Bocken fears for his future and the United States’ millions of service workers.
“People are not going to be able to support their families for more than two months,” said Bocken. “It’s going to hit every aspect of life and the government needs to react and help us get through this. That’s the only way it’s going to work, by putting money back in people’s hands.” 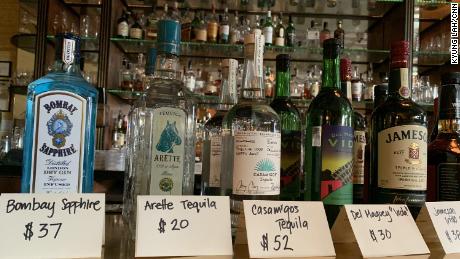 Both Bocken and Souder say without immediate intervention, the small businesses that fuel the US economy will be wiped off the map.
“I understand that there are certain industries that may be more vital than others, but it needs to be fair and it needs to go out to everybody, as fast as possible. It needs to be done the right way and not through loans,” said Souder, saying low interest loans only buries independent restaurants and stores under mountains of debt. “These businesses, if they do not receive help now, they will fail.”
Financial ruin is the new nightmare that hovers for Tom Sopit, the owner and general manager of Employees Only, whose rent is $1,000 per day.
A hotspot in West Hollywood, Sopit’s restaurant and bar opened for carry out, advertising on Instagram. Service workers wouldn’t pay Sopit—they showed their pay stubs and walked away with a free, hot meal. 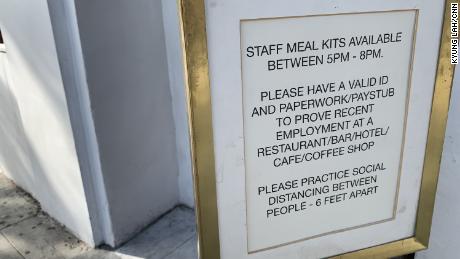 Sopit is calling it ‘family dinner.’
“All of us lost our jobs,” said Geri Courtney-Austein, standing in line waiting for her free dinner. “I didn’t even think this kind of generosity existed.”

What Sopit, who employs dozens of workers himself, didn’t want Courtney-Austein to see is that he doesn’t know how long any of this can last. He has a GoFundMe campaign to support the free staff dinners.
“The moment this happened we were going to dig ourselves in a hole regardless,” said Sopit. Tears falling as he contemplated what the next hours will reveal, Sopit shared, “I’m concerned. All we can do is help each other.”
Source: Read Full Article