‘The snakes and ladders game will continue till the consolidation process is complete simply because we don’t know how bad the scene is with some of the banks being merged,’ says Tamal Bandyopadhyay. 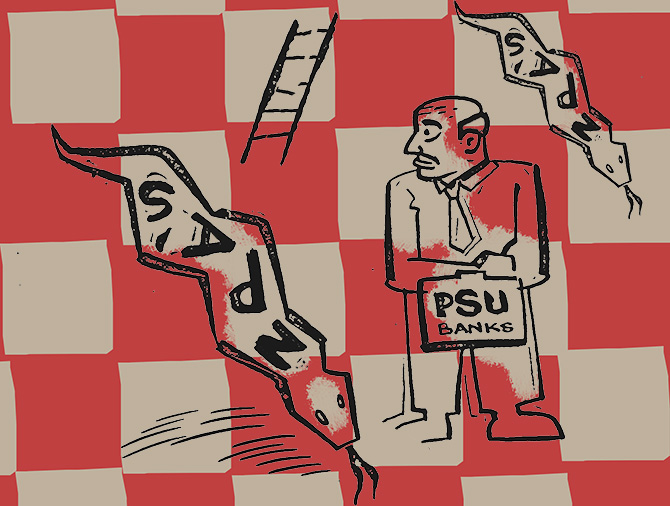 State Bank of India Chairman Rajnish Kumar has every reason to feel happy.

What could make him grin is the improvement in the bank’s quality of assets.

After setting aside money to provide for the bad loans, the bank’s net NPAs were 2.65 per cent, down 230 basis points (bps) year-on-year and 14 bps over the Sep­tember quarter.

One bps is a hundredth of a percentage point.

His former colleague Sanjiv Chadha, the new boss of Bank of Baroda (BoB), has a different story to tell.

The bank did not even allow him to settle down in his new role before announcing a Rs 1,407 crore net loss for the December quarter, driven by higher provisions for bad assets.

Now that the earnings season is over, let’s take a look at how Indian banks have done against the backdrop of tardy credit growth and the threat of new bad loans being created — a fallout of the deteriorating health of many high profile non-banking finance companies and the Supreme Court’s insistence that telecom companies must pay up their dues to the department of telecommunications.

For the record, in search of capital, two private banks have not yet announced their December quarter earnings.

Six of the 18 public sector banks were in losses in the December quarter.

In the previous quarter, five had been in the red.

The two new entrants in the ‘loss club’ are Punjab National Bank and Bank of Baroda while Union Bank of India, which had made a loss of Rs 1,194 crore in September, bounced back into the black.

Most private banks continue to remain healthy with their collective net profit crossing Rs 10,000 crore — around 55 per cent higher than both a quarter and a year ago.

For IDBI Bank, making losses has become a habit — since December 2016, its accumulated net losses are Rs 41,832 crore.

The only bank that can rival it is Indian Overseas Bank.

Its net losses in December was Rs 6,075 crore, because of a three-fold jump in provisions for bad loans.

Incidentally, IOB will not lose its identity by joining the wave of consolidation, which is sweeping India’s public sector banking industry.

After Vijaya Bank and Dena Bank joined BoB to make it a strong, big bank, the second round of consolidation envisages six weak banks being merged with four of their relatively better off peers.

When it comes to the pile of bad loans, no one can challenge IDBI Bank.

It has pared its stressed assets pile marginally, but still has 28.72 per cent gross NPAs.

The only other private bank with double digit gross NPAs is Jammu & Kashmir Bank Ltd (11.1 per cent).

Among the PSBs, IOB’s gross NPAs came down to 17.2 per cent in December from 20 per cent in September and 23.76 per cent in the year-ago quarter.

Bank of Maharashtra has 16.77 per cent gross NPAs and PNB and Bank of India 6.3 per cent each.

Post provisioning, the net NPA figures do not look that ugly.

IDBI Bank’s net NPAs in December were 5.25 per cent, far lower than many other banks.

IOB too has pared its net NPAs drastically to 5.81 per cent.

Overall, 15 of the 18 State-owned banks have more than 5 per cent net NPAs.

India’s State-owned banking industry is not out of the woods as yet.

Fresh slippages are staring at many of them.

Also, unless they start lending, it will be difficult to pare their NPAs as this is computed as a percentage of their loan book.

Why has this happened? Probably, the bank management was too busy with the merger of two banks with itself and did not have the time and bandwidth for new business.

The 10 banks that are going through this exercise will have the same predicament.

Besides, at this point, most banks are using their resources for the recovery of bad loans and that is turning out to be the main source of profits.

There are some good signs though.

One of them is the rising provision coverage ratio.

It has reached a healthy level for many, adding strength to their balance sheets.

For instance, IDBI Bank’s PCR in December was 92.41 per cent.

Six State-owned banks, including SBI and IOB, have more than 80 per cent PCR and barring three, all have at least 70 per cent PCR.

This could be the first sign of a turnaround story that will take a while to unfold.

The snakes and ladders game will continue till the consolidation process is complete simply because we don’t know how bad the scene is, with some of the banks being merged.

Tamal Bandyopadhyay, a consulting editor with Business Standard, is an author and senior adviser to Jana Small Finance Bank Ltd. His latest book is HDFC Bank 2.0: From Dawn to Digital.