John Lewis is writing down the value of its department stores by nearly half a billion pounds and will scrap the staff bonus as it warned it would make little or no profit this year.

The staff-owned retail group, which includes Waitrose supermarkets, reported a first half loss of £55m as the costs of the coronavirus pandemic offset a 1% rise in sales.

Sharon White, chairman of the John Lewis Partnership, said the loss for the six months to 25 July was in line with last year and described it as “a creditable performance in the circumstances and ahead of expectations”. 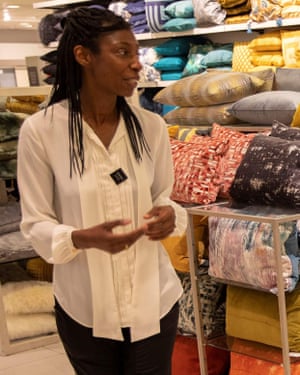 However, after one-off costs, including a writedown of £470m on the group’s property assets and further redundancy costs, total losses were £635m compared with a £192m profit a year before.

White warned that the group could make a small loss or only a small profit for the full year, as sales at its department stores suffered from weeks of closures during the high street lockdown and a switch to buying online as the coronavirus continues to alter daily life. White said a potential sales fall of 5% at Waitrose and 35% at John Lewis – set out in April – remained a “worst-case scenario.”

She said that “outside of exceptional circumstances” the company did not expect to start paying a staff bonus again until its profits exceeded £150m, and that it would pay a bonus of at least 10% if profits rose about £300m. Earlier this year, the company paid its staff – known as partners – a bonus of just 2% of salary, the lowest level in 67 years.

“I know this will come as a blow to partners who have worked so hard this year. The decision in no way detracts from the commitment and dedication that you have shown,” she said.

White said John Lewis was writing down the value of its department stores by £470m because of their poor performance – only 30% of online sales are now linked to a store, compared with 60% before lockdown.

Department store sales sank by 10% as the group was forced to close stores for several weeks during the high street lockdown. Online sales rose 73%. Since reopening, the company said stores were doing better than expected, with sales down 30% overall. The London stores, including Oxford Street where John Lewis has applied for planning permission to shrink its retail space, are down 40% as tourists and many commuters stay away.

The group permanently closed eight of its 50 department stores in July and said online sales account for 60% of the department store’s sales up from 40% before the pandemic.

“The pandemic has brought forward changes in consumer shopping habits which might have taken five years into five months,” White said.

Sales at established Waitrose stores rose almost 10% on the same period last year, as shoppers stockpiled ahead of the high street lockdown and then continued to fill their baskets with fresh produce as many restaurants and cafes stay closed.

The company said Waitrose.com orders were up 9% in the first week after it split from Ocado, which now stocks Marks & Spencer groceries instead. The group plans to increase capacity by 50% to 250,000 orders a week after reaching its target of £1bn in annual sales.