The podcasting business is at an unusual crossroads; the market, which is set to see revenues of $1B this year, has attracted A-list names from The Obamas, Harry and Meghan and Matthew McConaughey and has become one of the leading farm systems for IP, but there is still a wild west sense to the medium.

While it’s an exciting place for talent and creators, there is still a chaos surrounding the business of podcasting and arguably outside of a handful of largely true-crime stories and celebrity interview shows, there hasn’t been a culture defining hit since Serial launched in 2014.

Jared Gutstadt, founder of Audio Up and formerly the man known for writing theme songs to shows like Pawn Stars through his Jingle Punks business, is one of those who is strapping on his cowboy hat as he sets off on the ride.

In a wide-ranging interview, conducted over Zoom from his “Audio Chateau” in LA, Gutstadt tells Deadline how he wants to create a podcast company that is one part Andy Warhol’s Factory and another part 1940s Louis B Mayer Hollywood studio, working with characters such as Bob Dylan, James Elroy and Anthony Anderson, securing investment from companies including the soon to be-Amazon-owned MGM, how Hollywood is starting to understand the medium and why scripted podcasts can sometimes be like “jumping into a cold pool”.

Audio Up was launched in 2020 after Gutstadt, who says he’s like a “Roomba robot”, exited Jingle Punks, the music and TV company that he founded in 2008 and sold to Ole in 2015.

It began with an idea that turned into Bear and a Banjo, a fictional anthology series featuring Jason ‘Poo Bear’ Boyd and Rosanna Arquette, narrated by Dennis Quaid, produced by T-Bone Burnett and featuring some lyrics by Bob Dylan, who Burnett played with in the 1970s.

Gutstadt says that the series became one of the largest pre-sales of a podcast at the time – close to seven figures – thanks to a presentation at SXSW – which led to iHeart snapping it up to distribute. “I told everyone get out of my way, I’m going to learn how to write, direct, you know, produce, and I’m going to act in this thing. It was a weird Sling Blade moment and I threw myself into it completely,” he adds. “What happened next was it accelerated an interest in the space, from people going what is this? This is cool, you came to podcast with the right kind of intellectual energy.”

He admits that Bear and a Banjo was hard, “it’s like reading Gravity’s Rainbow”, especially in a world that was more used to the Serial, NPR-style podcasts, but it ignited an idea to throw himself into the medium, largely with musical podcasts as well as a handful of interview shows.

He is essentially trying to take the ubiquity of music streaming into the podcast space and realized that it has become an “incredible development tool for storytellers”, for brands and creatives, particularly musicians, during a time when the pandemic shut down touring. 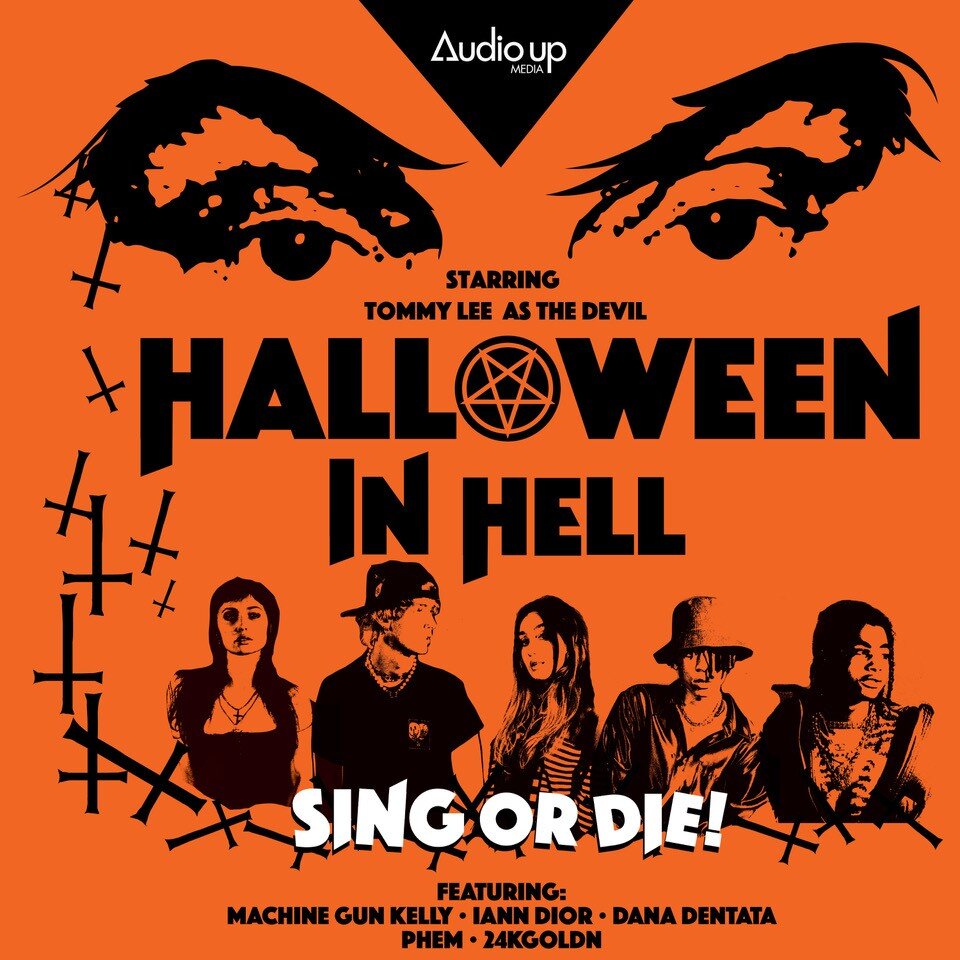 On the one hand, he has made series such as Halloween in Hell (left) with Machine Gun Kelly, Prom In Hell with Jxdn and Stormy Daniels and Uncle Drank featuring Quaid and Gary Busey, and on the other he has Mea Culpa with Michael Cohen, Donald Trump’s controversial fixer, Ever After with Jaleel White and Tom Green Van Life.

Gutstadt says, “This is radio theatre. It appeals to different parts of different people’s brains. For Jason, it’s a chance to act in a real actor way. For Machine Gun Kelly, it gave him a chance to be an entrepreneur, and an executive producer.”

He tells an amusing story of Anthony Anderson coming by his a podcast compound. “He makes so much money in his day job and after he was done recording, the band that we’re working with asked him if he was excited. He said, ‘Of course I’m excited about it, I’m not doing it for the money’. I was crying laughing because he’s not here doing us a favor, he had to really want to be there.”

The pandemic sped things up, but Gutstadt sees it as a long term play. “We feel like we’re building this weird, Marvel superhero universe of musicals. I hope that when Covid is over, we’re going to have a giant bag of IP, that’s recognizable as signature content. It may take a year. It might take two years or five years, but I believe, much like Bugsy building his casino in the desert, that there’s very, very big, long-term value here.”

One of the companies to see the long-term value in Audio Up is MGM, which invested $4.5M in the company in May 2020. Gutstadt knew Brian Edwards, President of TV Operations at the soon to Amazon-owned studio and he helped put together a deal. “I didn’t realize how lucky I was to find them as a partner, that early on. I think my naivety was that it’s very difficult to get a major company to agree on anything, never mind letting an unproven model into the building, and giving them a few million bucks,” he says.

Other investors included music publishing and talent management company Primary Wave as well as a number of individuals.

Gutstadt admits that they spent all of the money from the first round. “We went wild on scripts, and wild on talent deals, and wild on making music, and that’s all we could do, during COVID. It was almost a gamble.”

He has now closed a second round of investment, totalling eight figures across the two rounds.

The deal with MGM has seen it work on a number of projects together including an Are You Smarter Than A 5th Grader series, Lauren Lake’s Paternity Court and comedy series Unprotected Sets, based on the Epix stand up series. 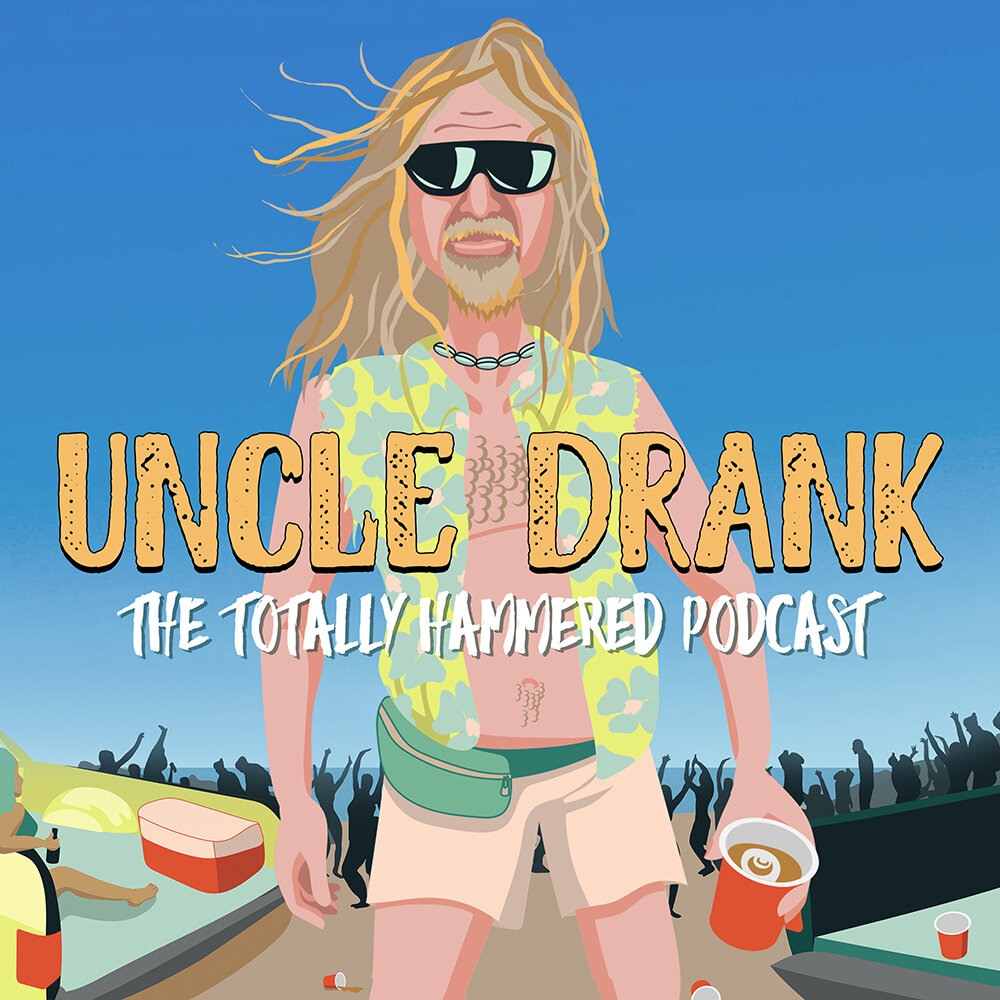 The studio is also looking to adapt a few of Audio Up projects for film and television and anything that MGM isn’t adapting, Gutstadt will take elsewhere. He says, for instance, Uncle Drank, has a five-to-eight year plan. “We think Uncle Drank will have coolers, spirits deals, clothing. He’s a lifestyle brand.” He is also eyeing potential unscripted TV series based on scripted podcasts, which is an unusual reversal, and hopes that its Missed Riffs series can become a UCB style comedy in a small venue.

“I would like to also find out what it is I have in our trick or treat basket after [Covid] is over. Take a breather, and figure out which [projects] we care a lot about, and which ones can be commercialized on the TV and film side, because as much as the Zoom window world is incredible for us, in this creative, fertile thing, it almost feels like I’m living in the theoretical, rather than the real, right now, and any of these meetings that I have with film executives, or TV, I don’t expect much out of them when it happens like this,” he adds.

Hollywood has been plundering the podcast space looking for shows to adapt. Shows like Homecoming and Dr. Death are podcast adaptations and there are hundreds of others in various stages of development across all of the networks and streamers.

But this town doesn’t necessarily have the most patient approach when it comes to IP. Gutstadt is unfazed that too many others will be able to replicate his success when it comes to scripted shows, particularly music-based offerings. “Unless I read that Alex da Kid or Max Martin are getting into podcasting, I’m not that worried about a flood happening,” he says. “If [Hollywood] says let’s make musicals, and you’re going to pick up the phone, as a producer, and call up Lin Manuel, or Trent Reznor. First, they’re going to say why? Then, they’re going to say, pay me.”

Scripted podcasting has somewhat struggled to replicate its unscripted success – arguably there hasn’t been a breakout hit of the scale of Serial. He admits that it is hard to listen to them sometimes because “it requires a part of your brain that you do not engage when listen to music”.

“It falls into somewhere between this infinite Netflix universe that’s visual, and the audio books. [During the pandemic], I gave up on dozens of audible books, I wanted to get through Moby Dick but 40 minutes in I don’t know where I fell asleep.”

But he says there is an audience that wants the “theatre of the mind” and that he is excited to crack it “otherwise I wouldn’t be here”.

Distribution is also becoming more of a headline in the podcast space. Previously, creators would essentially work with podcast networks and shows would go up everywhere but now you have Spotify doing exclusive shows, most notably with Joe Rogan, Audible making exclusive originals and even Apple dipping their toe into exclusivity.

Audio Up has a joint venture with LiveXLive Media and its PodcastOne service and many of these deals are essentially similar to a film or TV first-look deal.

He admits that it’s a little like the wild west right now but there are new opportunities opening every day with platforms, which all have different reasons for getting into the medium, although metrics can be a bit “lumpy”.

Audio Up is on track to produce around 40 shows this year and said, despite joking about spending all its investment has generated “some real revenue”. “It’s less expensive to fall on our face with a few little flops in the audio space. We at least now have a better sense of footing of where to go in the future, and confidently have the time wasters stop wasting our time with pitches, and things that we know can’t go anywhere.”

One person that he would take a call from is Drake. “I have to work with him. Maybe I’m crazy. Maybe I’m a teenager, but I consider Drake the most influential artist in the world, right now,” he says.

Even if the God’s Plan singer doesn’t get in touch immediately, Gutstadt is looking forward to the rest of the year. “I am excited, ecstatic, and scared to see what’s going to happen with live, when this is over. It’s going to be a sprint.”