In May, Ford will clock up 40 years of making car engines in Bridgend, south Wales. But the anniversary will pass without any celebration. Just months later, by 25 September, the production lines will come to a halt for the final time.

About 1,700 people were working at the 60-acre site halfway between Cardiff and Swansea when the closure was announced in June 2019, with Ford blaming “changing customer demand and cost”.

Dick Jenkins, a 47-year-old electrician, has clocked in and out of the plant for three decades, the only workplace he has ever known, since he joined a few days after his 17th birthday.

“I have never filled out a CV until now because I never had to. It’s scary. I know I’m not alone, but whatever happens next will only be the second job I have ever had.”

The community is braced for the loss of some of the region’s best-paid manufacturing jobs.

The average Ford salary is £41,000, according to the GMB trade union, and the carmaker has spent a significant sum of money to close the factory. A source described the redundancy and pension payouts for workers as the most generous they had ever seen. 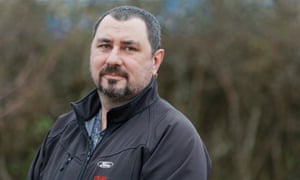 Local businesses fear the impact on the town nonetheless. Craig Williams, 34, runs Capelli Salons at the bottom of the town’s main shopping street, where takeaway restaurants and a row of barber shops sit alongside vacant premises.

On a wet weekday afternoon, behind the hairdresser’s steamed-up windows, a couple of clients are being shampooed and blowdried. When the Ford closure was first announced “there was almost mass panic”, and a few regular customers stopped coming.

“If their husbands or whoever worked there, we are going to lose custom. It’s a luxury to have hair and beauty done, you’ve got a priority to pay your mortgage,” said Williams.

Ford is the town’s largest employer and its biggest business rates payer. Property consultancy Altus Group calculates the plant paid £1.6m in rates in 2019-20, far more than any other company in the town.

Business rates, which are paid as a proportion of the value of the property owned by a company, are pooled in Wales between councils, and distributed centrally, meaning the effect of the shortfall will also be felt further afield. 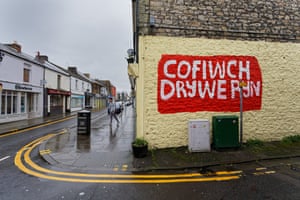 Six villages or estates in the Bridgend local authority area are among the nation’s 10% most deprived, according to the most recent Welsh Index of Multiple Deprivation. One is Bettws, a former mining village in Ogmore valley, where a colourful mural on the community centre wall recalls its industrial heyday.

In the 1970s, when the region began to lose mining and heavy industry, Wales enjoyed some success attracting foreign investment, often to Bridgend, with its proximity to the M4 motorway.

However many locals can reel off a list of the big foreign firms that have come and gone: Sony, LG, Bosch – and concerns remain about the long-term future of Tata Steel in Port Talbot.

The Ford workers and the Welsh government hope new arrivals will help to fill the hole left by Ford. The chemicals firm Ineos will assemble its Land Rover Defender-inspired 4×4 at a plant being built next to the Ford factory.

But the first car will not roll off the line until 2021, and Ineos is initially hiring only 200 staff. Jenkins has sent his CV and is awaiting a response. Other Ford workers are looking to Aston Martin Lagonda, which will start building its first SUV at St Athan, 10 miles from Bridgend, in the summer. However both of those companies combined will employ only a fraction of the Ford workforce.

The Welsh government has responsibility for economic development among its devolved powers over health, education, transport and planning. A block grant received from the UK government accounts for the majority of Cardiff’s £20bn annual budget.

Many in Wales feel overlooked by Westminster, and believe they are at the back of the queue after the English regions and other UK nations.

“Wales is only equivalent to 5% of the English population, it gets forgotten about,” says Victoria Winckler, the director of the Welsh thinktank the Bevan Foundation. “The UK government must not wash its hands of places in Wales.” 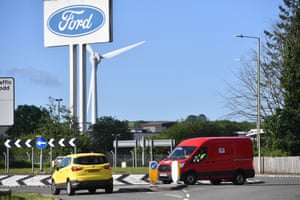 Infrastructure is not a devolved power, an issue that rankles locally, especially since the former transport secretary Chris Grayling in 2018 scrapped plans to electrify the rail line beyond Cardiff.

The £106bn for the HS2 high-speed line connecting London with Birmingham and the north of England was “another reminder of the gross inequality,” said Huw David, a Labour councillor and leader of Bridgend county borough council. “We are still waiting for them to electrify the railway between the capital and Swansea, the second city, never mind high-speed.”

Local Carwyn Jones was first minister of Wales until 2018, and the Labour politician is in his final term as Welsh assembly member for Bridgend. He believes Westminster has “let Wales down sorely” over infrastructure and energy strategy, chiefly the scrapped £1.3bn Swansea tidal lagoon project and the cancelled £16bn nuclear power station on Anglesey.

Bridgend went blue for the first time in 32 years in the election, making the serial entrepreneur Jamie Wallis only the constituency’s second Conservative MP since its creation in 1983, with a majority of just over 1,000.

His office did not respond to requests for comment.

One in six workers in Bridgend are employed in manufacturing, according to the TUC, double the UK figure. Future economic success means securing high-tech, quality jobs, says Jones.

“We’re not going to compete with low-cost economies even if we try. We want to attract jobs into Bridgend and elsewhere on the basis that we have a skilled workforce and a pipeline of training,” he said. 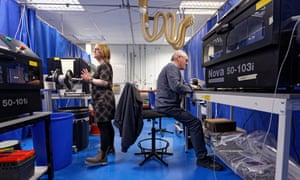 Spectrum Technologies offers those kind of jobs, if a limited number, with a 58-member workforce that makes laser-marking equipment for aircraft wires and cables.

The chief executive, Peter Dickinson, plans to take on a handful of new employees in the next year, but has historically found it hard to recruit engineers from the company’s doorstep.

Lamenting the local rail, road and air infrastructure, Dickinson says if he was choosing where to locate the company now, he would not pick Bridgend, “unless and until there is a levelling up and the government addresses the issues that impact both the region and us as a company”.

Election result The Conservatives won Bridgend for the first time in 32 years, with a 6.8% swing from Labour to Conservative