How much of your retirement portfolio should you allocate to emerging market equities?

“Very little” is the answer provided for years by many retirement planners. One argument they’ve made is that the combined market cap of emerging market equities only makes up about 15% of the global total, so a 60:40 portfolio appropriate to many retirees would default to allocating just 9% to emerging market equities. And, given their greater risk, due to things such as trade wars and the like, many advisers argued that even this 9% was too high.

And over the last decade, these advisers and their clients were well rewarded for avoiding emerging market equities: U.S. stocks doubled their annualized return. But might the tide now be turning?

That’s an urgent question for retirees, since we’d be hard pressed to find another time when emerging market equities were more undervalued relative to U.S. stocks than they are now.

Take the cyclically-adjusted price/earnings ratio (or CAPE), which was made famous in the 1990s by Yale finance professor (and Nobel laureate) Robert Shiller. In 2008, in the middle of the Great Financial Crisis (GFC), the U.S. stock market’s CAPE was only slight more than half that of emerging markets. Today, in contrast, it’s just the reverse: The U.S. market’s CAPE is 27, versus just 13 for emerging markets.

To be sure, the CAPE has been roundly criticized in recent years for falsely sending a bearish message about U.S. stocks. But notice that I am focusing on relative rather than absolute valuations. And on that basis the CAPE has acquitted itself quite well since the GFC, as you can see from the accompanying chart: Since the end of 2008, the S&P 500 has nearly doubled the return of emerging market equities—14.6% to 7.8% on an annualized basis—as judged by the total returns of the SPDR S&P 500 Trust SPY, +2.65% and the iShares MSCI Emerging Markets ETF EEM, +1.61%. 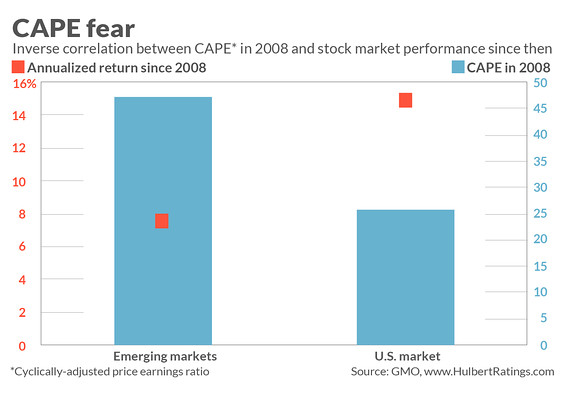 Boston-based GMO believes this situation is likely to reverse itself in coming years. The firm is projecting that U.S. equities will produce an inflation-adjusted annualized loss of 4.2% over the next seven years, versus an annualized gain of 8.9% for emerging market equities.

Needless to say, GMO is just one firm, and there are many others that believe U.S. equities will do better in coming years, both in an absolute sense and relative to emerging market equities. But GMO is not alone, either. California-based Research Affiliates, for example, is projecting that emerging market equities will produce a 6.6% annualized inflation-adjusted and dividend-adjusted return over the next decade, versus just 0.3% for the S&P 500.

But doesn’t the CAPE work far better in the U.S. market than for emerging markets?

One potential comeback is that, even if the CAPE was right in a relative sense at the end of the GFC, it tells us little about emerging markets in particular going forward. Consider a statistic known as the r-squared, which measures the degree to which one data series (in this case, the CAPE) explains or predicts another (in this case, the stock market’s subsequent 10-year return). The r-squared’s highest possible reading is 1.0, while a 0.0 reading would mean that the indicator has no explanatory or predictive ability whatsoever.

According to a study conducted by Joachim Klement, chief investment officer of Switzerland-based Wellershoff & Partners, the r-squared in the case of the U.S. stock market is 0.38, versus just 0.06 for a value-weighted composite of emerging market equities and 0.18 for a composite that equal-weighted each emerging stock market.

As Klement is quick to point out, however, one likely reason that the r-squared is so low for emerging markets is that there is relatively little history and therefore insufficient data. So it would be going too far to completely dismiss the message of the CAPE data for emerging markets.

I think the classic statement from Warren Buffett, chairman and CEO of Berkshire Hathaway BRK.A, +1.96%BRK.B, +2.10%, is helpful in this context: “It is better to be approximately right than precisely wrong.” The CAPE is not perfect, but it’s not worthless either.

And right now its admittedly imprecise message is coming through loud and clear.

Mark Hulbert is a regular contributor to MarketWatch. His Hulbert Ratings tracks investment newsletters that pay a flat fee to be audited. Hulbert can be reached at [email protected].