Prices shot up like a rocket earlier this year, soaring 30% between March and June according to the consumer price index, the federal government’s main inflation barometer. That was by far the steepest three-month increase in those prices, according to government data that goes back nearly 70 years.
Before the recent run-up in used car prices, which started last fall, the biggest 3-month rise in prices was only a 12% jump in 1974.

But prices edged up only 0.2% in July, and gauges from the industry have raised hopes that the prices are at least leveling off if not about to start a modest decline.

“Wholesale prices look like they peaked eight weeks ago, and have been moving down since then,” said David Paris, senior manager of market insight for JD Power. Typically retail prices follow wholesale prices with that kind of time lag, he said. “The vehicles being sold at dealerships today were acquired on average five to six weeks ago.”
But that might not immediately lower the prices that customers pay.
In this wild car market, dealers have depended less on wholesale purchases to fill their used car lots, buying an increasing number of cars directly from owners. Some dealers are actually advertising to buy rather than sell cars, and robocalls offering to buy cars have started to annoy people on their cell phones.
Also, demand for used cars remains strong. That could keep prices from slipping dramatically, even if wholesale prices start coming down.
“In a situation where there is still lot of demand, I think used retail prices have the potential to hold up better than wholesale,” said Paris.

Used car prices may be reaching their peak, because they can soar only so high before they become unreasonable for customers. 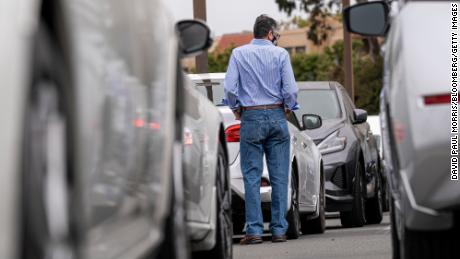 The gap between new and used car prices narrowed during the recent run-up in used car prices, so the used car prices are likely reaching near their natural ceiling, said Jessica Caldwell, executive director of insights with Edmunds. At some point people who are car shopping will decide to buy new rather than used, even if they have to wait for the new car they want, she said.
“It comes to the point where it just doesn’t make sense to buy used,” she said. “We don’t expect the prices to correct and go back to 2019 levels, but we expect them to become more normal and cool off in the second half of the year.”
Used car buying typically slows in August, as tax refund checks (and stimulus checks this year) have been spent. And some folks who might have been shopping for a car in anticipation of returning to the office in September may have delayed a purchase as they wait to see when they they will in fact need to return.

The price increases earlier this year were driven by a number of factors. No. 1 is that lesson from the first day of Econ 101: supply and demand. Limited inventories of products coupled with strong demand equals upward price pressure. And both those things have occurred since last fall in the used car market.
First, the supply constraints: When travel ground to a near halt in the early months of the pandemic, car rental companies, typically a major source of the supply of used cars, dumped much of their fleets in order to raise cash to survive. Despite the rebound in demand for rental cars, the shortage of computer chips needed to build new cars has restricted the supply of new vehicles they could buy, so they are holding onto the cars now in their fleets. That has choked supplies. Through the first seven months of this year, the number of used cars sold at auction was 26% lower than the same period of 2019, ahead of the recession.
The limited supplies of new cars has driven up those prices as well, and pushed some car buyers to buy used rather than new, increasing demand. And various government stimulus programs during the pandemic has also put money in potential car buyers’ pockets, helping to create greater demand for both new and used cars, as has low interest rates keeping car payments low.
But some of these factors are waning — new car production, while still limited, is picking up and stimulus checks have mostly already been issued. So some of the upward pressure on pricing may be waning.

That doesn’t mean it’ll be easy to find a cheap used car. In fact, it might be tougher even if the average increase is leveling out.
“There aren’t a lot of cheap used vehicles on lots any more. Those cars — the 10-year old used car in decent shape – were snapped up in the spring,” said Caldwell. “So the available vehicles are relatively new, and fairly expensive. So it’s going to remain hard to buy inexpensive used cars.”
Source: Read Full Article