When Mike Ashley was hauled in front of a parliamentary select committee in 2016, the Sports Direct boss was very clear about his company’s principal priority.

Asked to name one value the retailer “held dear from the very top to the bottom”, the billionaire shot back: “It is the people. That is the value. The value of Sports Direct is the people, finished.”

The response caused the odd eyebrow to arch among those watching the tycoon’s bravado performance, chiefly as he was there to answer allegations that his massive warehouse in Shirebrook, Derbyshire, was operating like a Victorian workhouse.

A day at ‘the gulag’: what it’s like to work at Sports Direct’s warehouse

The previous December, the publication of a Guardian undercover investigation had exposed how workers there were being paid illegally low wages, while the poor working conditions for the largely east European immigrant workforce had become so notorious that the facility was known locally as “the gulag”.

To some, the perpetual review of the firm’s working conditions that the billionaire outlined to MPs does not appear the priority it was when the firm’s majority owner was under public fire. All of which meant, it was time for the Guardian to return to “the gulag”.

What we encountered on entering the depot undercover in 2020 was quite different to 2015.

To begin with, the company is now called Frasers Group after the acquisition of House of Fraser, while the warehouse is now about twice the size it was in 2015. It is a vast complex spanning around 2 million square feet – about the size of 27 football pitches – and it would be churlish not to acknowledge how the company had made some improvements inside.

The queues to clear security checks before workers could leave the warehouse at the end of their shifts – which caused much of the minimum wage breach in 2015 – are not the problem they once were, chiefly as they are now mainly conducted on the company’s time.

Still, workers continue to be scanned and searched, as the company fears some might be tempted to steal. During induction, new starters are drilled not to wear watches or “any brands … you can wear Sainsbury’s, Asda, H&M, Primark”.

The police are called to Shirebrook to deal with thieves every week, we are also told, while we will be watched by 1,000 cameras inside the warehouse.

Security is increased further in the new section of the warehouse that deals with orders from the company’s upmarket Flannels division, which sells designer brands ranging from Alexander McQueen to Armani and Versace to Vivienne Westwood.

Workers cannot leave that unit without going through a special check – that often involves standing in front of scanning machines to make sure staff are not smuggling out a £400 pair of trainers or a £1,800 handbag.

However, unlike 2015, workers are now largely paid for this time. It is elsewhere where the scorecard might not be showing quite that improvement. 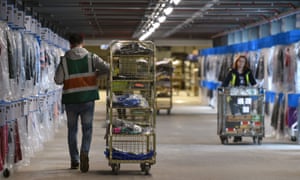 Following the last controversy, Sports Direct had promised a variety of new policies to correct the problems.

The retailer pledged to consider giving more of its warehouse staff – the vast majority of whom are actually engaged through four temporary employment agencies – full time contracts with Sports Direct, as unions pressed the point that the precarious nature of these transitory deals meant many workers felt powerless to raise concerns about Shirebrook working conditions.

As Paul Blomfield, a Labour MP on the business select committee asked Ashley at the time: “You are a 24/7 business, 52 weeks a year, very successful with a constant flow of work. We heard from [one of your employment agencies] that last year the people that they placed with you worked for 39 hours a week, which is a standard working week. You have described these as amazing, hardworking people, who generated all the wealth of the company. Why do you not give them a permanent contract?”

Ashley said such a move would be impossible, but the company did eventually pledge to consider the idea, at least partially.

A 2016 report on the firm’s working practices, commissioned by Sports Direct from its law firm RPC, stated: “The board is considering running a test scheme aiming to transfer 10 picking staff a month from the agencies to SD.”

That looked like decent news – not least because it is not too difficult to find temporary Shirebrook workers who have been working at the warehouse for years.

Had the board’s idea to hand out more permanent contracts been enacted, more than 300 extra temporary workers would now have permanent contracts – but the company says that 170 transferred “under the test scheme”. It added that the number of agency staff in the warehouse has been reduced, although it did not give numbers.

As one agency worker said: “There are a few who have full-time contracts, but they have [mostly] been here for about 10 years … It would be better for us [to get full-time contracts] but not for [Sports Direct]. Think about it. Managing 5,000 people.”

The temporary nature of a Shirebrook worker’s post was raised by the select committee four years ago, as it was argued it left workers vulnerable to instant dismissal – especially as the warehouse was running a controversial “six-strikes” system, whereby workers could be dismissed for six, often seemingly innocuous, offences.

That policy was axed in 2016 but, despite this improvement, it is not uncommon to come across similar concerns now, with some agency workers fearing swift dismissal and being targeted by individual supervisors.

During our spell inside the warehouse this summer, the Guardian witnessed episodes that suggest there could be numerous small incidents that might leave workers concerned their jobs could be removed at the whim of a supervisor.

“She is after me again,” we witnessed one worker complain to an agency boss, as he claimed a manager was victimising him. He added the supervisor had threatened to instigate an investigation against him after erroneously claiming he was leaving his shift early.

We also saw another worker threatened with disciplinary action for wearing a pair of headphones, as he clocked out at the end of his shift.

Wearing headphones in the warehouse is a breach of health and safety regulations. But as the warning was shouted from a distance in front of numerous other colleagues – and while the worker was almost out the door of the depot and away from obvious hazards such as forklift trucks – the move did feel like an over-reaction and, perhaps, a statement of authority by the manager.

Frasers Group said: “Tellingly you try to rely upon a handful of unparticularised examples to suggest that ‘agency workers can still feel that they are at threat of swift dismissal and that they are targeted and threatened by supervisors’. This doesn’t come close to justifying the allegation.”

Certainly management doesn’t appear to discourage workers from feeling they are being watched.

You are frequently asked to sign off your own performance statistics and there is a sense that some people might be made to feel more under pressure than others. As one supervisor put it, when asked which of the bosses are unpleasant: “One woman with an orange vest [which are worn by section leaders]. She is nice if you are a good worker. If you are lazy she is crazy.”

There is a balance to be struck here, clearly. The Shirebrook warehouse is part of a huge business, and is not a holiday camp. Workers are obviously there to provide their labour in exchange for a wage, albeit pay that has reverted to almost the lowest possible levels.

Inside the warehouse there is plenty of room and so social distancing can usually be observed. However, despite all the Covid-19 notices and hand sanitiser placed around the facility, there are occasions when workers get closer than two metres apart and hardly any of them wear a mask. Should you want to cover your face, workers are told they can obtain a mask from their employment agency’s office on the Shirebrook site. 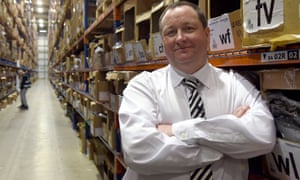 As part of Sports Direct’s response to the Guardian’s 2015 investigation, the RPC report stated that a “policy is in place to ensure all warehouse staff are paid above National Minimum Wage (“NMW”). [The] previous breach of NMW in the warehouse was unacceptable but unintentional”.

Warehouse pay was hiked to 20p an hour above the national minimum, in order to prevent breaching the legal minimum pay rates because of unforeseen systematic issues. Ashley also stated that Sports Direct would be “the best high street retail employer after John Lewis”. Yet now, that premium has been almost entirely eroded.

Warehouse jobs at Shirebrook are routinely advertised at just 3p an hour above the legal minimum pay rates. So almost any issue around extra working time – such as being asked to finish a job for five minutes after the end of a shift – means that Sports Direct is perilously close to risking further breaches of minimum wage law.

One Shirebrook worker, who left this summer, said it was as if they were trying “to ‘steal’ minutes from employees, if it works, it’s fine by them,” Further examples of potential minimum wage breaches are not too hard to find.

Over an eight hour shift, workers are permitted one unpaid 30 minute break – ten minutes more than the statutory 20 minute minimum for a shift of six hours or more.

The law says that workers must be allowed to spend the time away from their workstation if they have one and that companies do not have to pay workers for their break time. 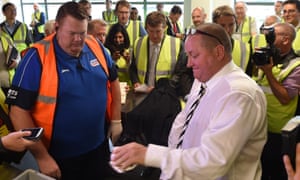 However, some employment law experts expressed the view that the law meant if a worker is prevented from spending that break time how and where they want, the rules state that they should be paid for it. At rates just 3p an hour above the legal minimum, not paying workers for working time would effectively mean a breach of minimum wage law.

Frasers Group said its warehouse workers did not have to be paid for the breaks and that the business had “no rule preventing staff leaving the warehouse during a rest break”. It added that workers were allowed to use their breaks freely and for their own purposes.

But we found that the firm’s workers cannot spend their unpaid breaks how they wish as they are confined to the warehouse, with the only real options being either a staff canteen or a smoking terrace.

During our shifts, we asked three separate supervisors if we could leave the warehouse during the break. Each time we were told that was not possible. It is easy to hypothesise why.

If workers were allowed to leave the warehouse, they would have to go through the same 15 minute security checks that exist at the end of shifts. In a warehouse where an estimated 2,000 workers are on duty at any one time, the costs could be huge.