Isidore (CNN Business)For most employers it’s full-speed ahead on Covid vaccine mandates, regardless of whether the courts uphold or strike down President Joe Biden’s requirements.

A Federal Court of Appeals put on hold the Biden administration’s plans to mandate vaccines or weekly tests for staff of businesses with 100 or more employees. But a flash survey of 300 businesses conducted Tuesday by Gartner showed that 60% of companies are going ahead with plans as if Biden’s January 4 deadline remained in place.
Only about 10% of the business executives who participated in the survey Tuesday said they were taking a step back from their plans, according to Brian Kropp, the chief of research at consulting firm Gartner’s HR practice. Another 30% said they are still weighing how to proceed.

“When you look at the number of companies that have already put in a mandate, it’d be hard for them to turn it around,” said Kropp.

Court decisions against mandates apply only to the government’s rules, not to individual companies that have instituted their own vaccine requirements. And they’re holding up against legal challenges. For example, a federal court this month upheld the United Airlines (UAL) employee vaccine mandate — which was enacted before the federal rules were announced in September — after facing the same kind of temporary hold that’s been placed on Biden’s rules.

About 25% of workers surveyed by health policy think tank KFF last month said their employers now have a vaccine mandate, up from just 9% in a June survey. But about 80 million private sector employees would fall under the rules proposed by the Biden administration.

The decision by the Court of Appeals based in New Orleans on Friday was harshly critical of the authority of the Occupational Safety and Health Administration to demand employers order the vaccines or testing in an effort to keep workplaces safe. The three-judge panel called the rule “fatally flawed” and “staggeringly overbroad.”
But the decision put the mandate on hold — it did not strike it down. The case has since been reassigned to another Federal Court of Appeals in Ohio.
Many expect the case will end up before the Supreme Court. Although there is a conservative majority on that court, it has declined to block other vaccine mandates brought before it since the start of the pandemic.
That legal uncertainty is one reason that many experts say it makes sense for businesses to move ahead with the plans for vaccine mandates or testing.
“If they’re paying attention, they will understand this is a preliminary decision. There’s a whole lot of legal process yet to unfold,” said one industry expert involved in advising companies what to do, who asked that he and his organization not be identified. “Just about everyone will tell you this is heading to the Supreme Court before the end of the year. People need to understand this isn’t dead yet.”

Beyond the desire to keep employees and customers safe from Covid, businesses may decide to impose vaccine or testing mandates to reduce absenteeism as well as health care costs. Delta Air Lines (DAL), which has not put in a vaccine mandate, is charging its unvaccinated employees an extra $200 a month in insurance premiums. The company estimates that each employee who has been hospitalized for Covid has cost the airline an average of $50,000. 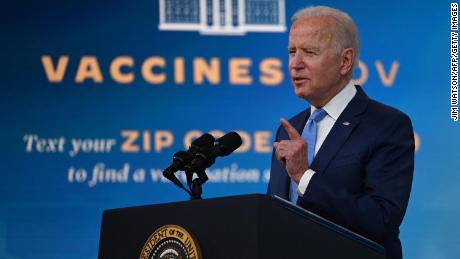 “In general business people want to get back to normal and vaccines are the quickest way to get to normal,” said Adam Galinsky, professor of leadership and ethics at the business school at Columbia University. “Mandates work.”
Some business groups, including the US Chamber of Commerce and the Business Roundtable, a group made up of many of the nation’s largest and more powerful companies, have voiced general support for the mandates.
Many businesses were counting on the the federal mandate to allow them to put in place rules they wanted — so they could tell their vaccine-hesistant workers they had no choice but to get the shot. They also wouldn’t have to worry about losing those workers who didn’t want a vaccine to similar-sized companies.
“This court decision creates another stumbling block for employers who want the rules,” said Kropp. “Now they have to go back and respond to employees who say ‘The courts say it’s illegal.'”

A large percentage of unvaccinated employees say they will quit their jobs if they are required to get vaccinated — or even if they are given a choice between vaccine or weekly testing. That’s a concern for some employers, at a time of record number of workers quitting their jobs and businesses unable to fill the job openings they have.
Retailers in particular have voiced opposition to the idea of a federal vaccine mandate. The National Retail Federation is one of the groups that has praised the court’s move to put the federal rules on hold, saying that the federal mandate would hurt many of its members through the loss of suspended employees during this highly competitive labor market, compliance and monitoring costs associated with the mandate, the diversion of resources.
“The court recognizes that the [federal mandate] presents an incredible and unprecedented burden on millions of businesses across the country. They acknowledge the tragic loss of life and the seriousness of Covid-19, but that transmission is not inherently a workplace issue,” said the retailers’ trade group.
Some employers seeking workers are including “no vaccine required” in their job listings as a way of attracting vaccine-hesitant workers.
But the experience of many of the companies like United and Tyson Foods (TSN) that have imposed strict vaccine mandates is that very few employees — well less than 5% — have quit their jobs when faced with the choice between vaccines or job loss.

Kropp said with many businesses planning to reopen offices early next year for the first time since the start of the pandemic, employers also have to worry about employees not wanting to return to the office without the assurance that their co-workers are all vaccinated as well. That’s another reason that some employers will go ahead with their own rules, even if the ongoing court battles mean the federal rules won’t go into effect by the planned date of January 4.
“The advice that HR execs are getting from their general counsels is this will happen, that this is a perfectly legal mandate,” said Kropp. “But this could delay things two or three months. For businesses that don’t want to delay their office reopenings while they wait on the courts, that’s another reason to go ahead with their own rules.”
Source: Read Full Article