Hong Kong (CNN Business)Hong Kong police have arrested and charged two former Cathay Pacific staffers for violating the city’s quarantine rules, underscoring the challenges the city’s flagship airline and its staff face under some of the world’s most restrictive anti-pandemic policies.

The government on Monday confirmed the arrests of two former flight attendants, saying that they ran afoul of orders preventing them from leaving self-isolation.
While authorities did not name the airline, Cathay confirmed to CNN Business on Tuesday that the two people worked for the company, but are now “no longer employed” by the carrier. The company added that it is “acutely aware of the critical importance of complying with anti-pandemic measures both in Hong Kong and overseas.” 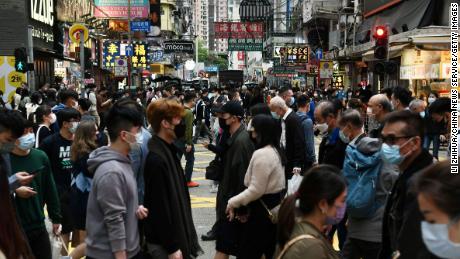 Hong Kong is home to some of the toughest quarantine rules in the world, as it and mainland china stick with “zero Covid” strategies intended to eliminate any trace of the coronavirus.

Most people coming into the city are forced to quarantine in a hotel for up to three weeks upon arrival, even if they are inoculated. Flight crews are subject to varying rules depending on their routes, but even those restrictions are getting tougher. Earlier this month, the government announced that all cargo air crew based in the city who have stayed overseas will need to spend seven days in hotel quarantine when they return, up from a three-day isolation requirement.

Like staff at many airlines, all Cathay flight crew are fully vaccinated. But Cathay pilots told CNN Business several weeks ago that the airline had adopted strict policies for those traveling to countries designated as “high risk,” such as the United States, India and the United Kingdom.
The government and Cathay did not give details about the flight attendants who were arrested, or what their quarantine orders were. But in its statement announcing the arrests, authorities said they arrived in Hong Kong from the United States on December 24 and 25, respectively. On December 25 and 27, they “conducted unnecessary activities” while they were meant to be in isolation, according to the statement.
Both people later tested positive for the Omicron variant of the coronavirus, and have been discharged from the hospital. They are out on bail but due in court February 9. If convicted, they could face up to six months in jail.
Hong Kong recently identified a number of Omicron cases in a cluster linked to aircrew — breaking a nearly three-month streak of no locally transmitted Covid infections.

As fears of local Omicron transmission grow, authorities have introduced new restrictions over the last few weeks, including a ban on dining-in after 6 pm, and shutting gyms and spas.
While Cathay has said it will comply with the government’s quarantine orders, the airline has also warned of their toll. Last month, the company said the measures could lead to “dramatic disruptions” to local supply chains, as the company is forced to curb some passenger and cargo flights.
Source: Read Full Article