The sharp sell-off across the financial markets last week on heightened fears of a global pandemic had many active traders calling for a long-term reversal of the primary uptrend. While protecting or locking in multi-year gains may seem like the logical move, the charts discussed below suggest that traders may have more time to plan out their exit points than it feels.

One of the market segments that could poise to be of specific interest over the coming weeks is known as the dividend aristocrats. The companies that have paid and grown dividends for at least 25 consecutive years represent a unique combination of stability and growth, and they could be the group that pulls the markets higher again.

Followers of technical analysis who want to get a sense where a certain market segment is headed often turn to exchange-traded products such as the ProShares S&P 500 Dividend Aristocrats ETF (NOBL) for clues. Taking a look at the weekly chart below, you can see that the price has been trading within an established channel pattern since the start of 2016.

Traders will most likely want to take note how the price has quickly fallen toward the support of the lower trendline and is now near the lower end of the pattern. Some active traders would use the proximity to this long-term support as enough of a reason to buy near current levels, while others may want to remain on the sidelines in case the price falls toward the extreme support of the 200-week moving average. Regardless of the outlook, the existence of the long-term channel pattern suggests that the underlying trend is still in the favor of the bulls, and this will remain the case until the price notches several closes below the aforementioned support levels. 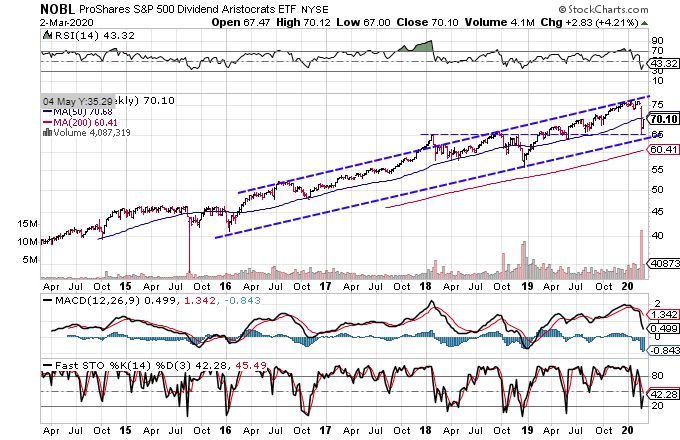 Of all of the holdings of the NOBL ETF that are gaining attention of active traders, The Clorox Company (CLX) is one that is standing out from the crowd. As you can see from the chart below, the price has been trading within a multi-year channel pattern.

The surge in interest over the company's products due to the coronavirus has pushed the stock price above the key resistance of the upper trendline, which in turn has triggered a bullish crossover between the 50-day and 200-day moving averages. The common long-term buy signal suggests that the next leg in the long-term uptrend could just be getting underway. From a risk-management perspective, stop-loss orders will most likely be placed below $158.45 to protect against any sudden shift in fundamentals or surprise sell-offs. 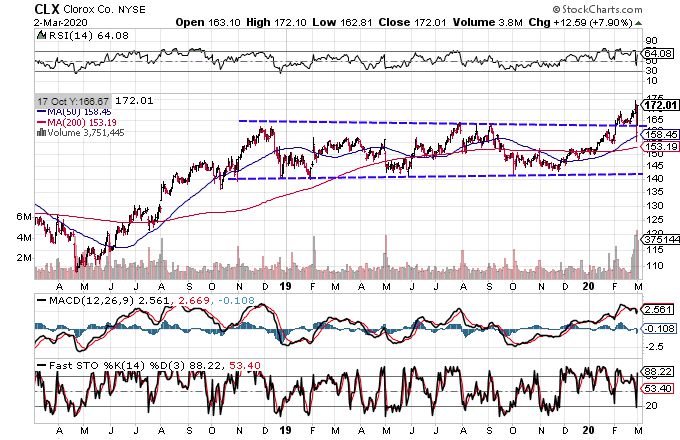 Another top holding of the NOBL ETF that could be catching the attention of active traders is AbbVie Inc. (ABBV). The drug manufacturer, which currently has a market cap of more than $131 billion, looks poised to continue its trek higher over the weeks and months ahead.

As you can see below, the price has recently fallen toward the support of an influential trendline. The bounce from the $80 level suggests that the bulls are still in control of the long-term momentum, and depending on risk tolerance, stop-loss orders will most likely be placed below the trendline or the 200-day moving average. 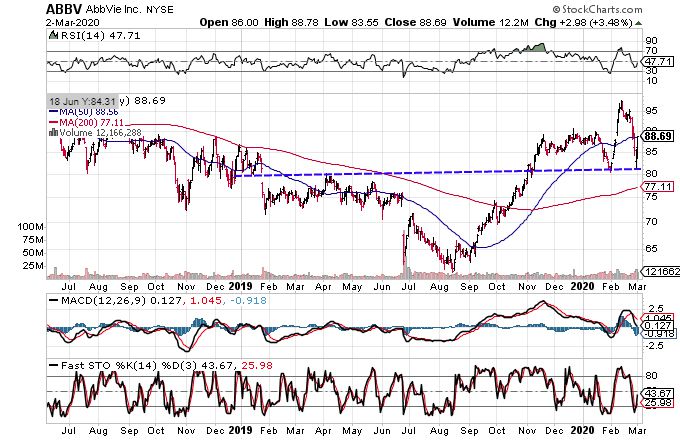 Many traders are looking at the breakdowns across the market as a sign of a potential market reversal. However, charts of the dividend aristocrats discussed above suggest that a reversal may not be as imminent as it feels, and traders may in fact have more time to plan their exits than they believe.

At the time of writing, Casey Murphy did not own a position in any of the assets mentioned.