California banned sales of new fossil-fueled cars by 2035, heralding the end of the combustion engine’s hegemonic reign over the American auto industry.

In issuing his executive order Wednesday morning, Gov. Gavin Newsom (D) trumpeted the move as “the most impactful step our state can take to fight climate change” at a moment when historic fires are scorching the state.

Cars, trucks and other vehicles produce the majority of U.S. climate-changing emissions. California’s densely populated southern region, in particular, suffers disproportionate levels of air pollution as a result of its geography and its crisscrossed belts of car-clogged highways.

Newsom’s decision will reverberate across the country. California’s special right under the federal Clean Air Act to set stricter air pollution standards, coupled with its massive car-driving population, has long afforded the state an outsize role in shaping national standards for vehicles. For example, more than a dozen states, representing roughly half the nation’s population, follow the Golden State’s rules on tailpipe emissions, offering a powerful bulwark against the Trump administration’s efforts to weaken pollution rules.

At the same time, worker safety violations at California’s premier electric car factory highlight the risks of relying on state regulators to oversee the industry and show a need for firm stronger federal labor protections.

That’s the finding of a detailed new report from the Center for American Progress, the influential liberal think tank with deep ties to Democratic Party leadership. The 40-page paper, published Wednesday afternoon, lays out a roadmap for making sure the electric vehicle industry as a whole avoids the problems that in recent years have plagued Tesla, the Fremont, California-based maker of sleek, battery-powered cars. 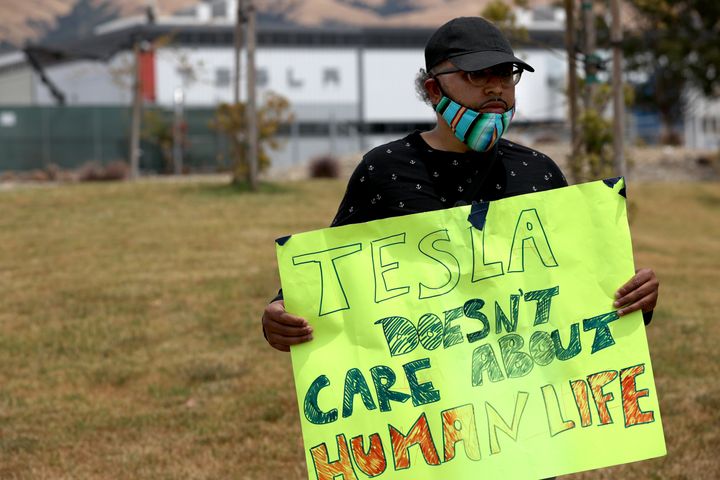 In 2017, workers at Tesla’s assembly plant in northern California complained of regular injuries and dangerous conditions. In 2018, a former high-level safety officer at Tesla sued the company for allegedly covering up workplace injuries and firing him in retaliation for reporting unsafe conditions. In 2019, a federal judge ruled that Elon Musk, Tesla’s billionaire chief executive, broke labor laws when he tweeted messages discouraging his workers from unionizing. In 2020, a worker in California called Tesla’s factory there “a modern-day sweatshop.”

The report, which the United Auto Workers union endorsed, calls on federal policymakers to condition government support, in the form of subsidies or tax breaks, on electric vehicle companies’ compliance with strict safety standards and anti-discrimination rules. It also demands that vehicle manufacturers and maintenance providers respect workers’ right to organize a union and partner with unions to train employees on the latest safety protocols.

The proposal centers on the federal government’s purchasing power. As the government enters into contracts to buy electric vehicles to replace its existing fossil-fueled fleet, the report proposes banning deals with any companies that require employees to agree to “forced arbitration,” a legal process by which employee grievances are hashed out in binding out-of-court negotiations that workers cannot appeal in court. Tesla is facing pressure from one of its shareholders to end its practice of forced arbitration in cases of alleged sexual harassment or racial discrimination at the company.

By implementing standards like those in the report, the Center for American Progress argues the federal government could effectively end such arbitration practices at any company that hoped to enter into a lucrative federal contract selling, for example, zero-emissions offroaders to the National Park Service or black SUVs to the Secret Service.

Strict labor rules would ensure that the United States maintains a “well-trained and stable workforce,” said Karla Walter, the center’s director of employment policy and the report’s lead author.

“When the U.S. is competitive, it’s not because we cut standards to the quick,” she said. “Having a stable workforce comes from having a workforce that’s well-paid, has rights on the job and is safe. Then you end up with good results.”

The report does leave some big questions open. While the proposal calls for federal incentives to increase domestic manufacturing in the electric vehicle industry, particularly of the batteries that power the cars, it offers little on how to avoid abuses in the overseas supply chain beyond pointing to the nonprofit BlueGreen Alliance’s guidelines. It also provides virtually no guidance on how to retrain and transition workers in the independent auto maintenance industry to deal with electric vehicles. Federal data shows the independent auto maintenance industry employs nearly 800,000 workers, including many undocumented immigrants.

The report’s findings generally support a growing slate of legislation that Democratic lawmakers are already proposing. Joe Biden, the Democratic presidential nominee, made the buildout of a national electric vehicle charging network a main plank of his climate platform. Senate Minority Leader Chuck Schumer (D-N.Y.) introduced a sweeping bill last October that proposed spending $450 billion to replace one-fifth of the country’s vehicles with zero-emissions alternatives over the next 10 years.

That bill made little progress in the Republican-controlled Senate. But if Democrats retake the Senate and White House in this year’s election, as polling suggests is a possibility, such proposals could quickly gain steam. Boosting the use of electric vehicles would be a popular approach. While only a minority of voters support policies to make personal car ownership more expensive (an approach favored by many climate activists and transportation reformers), majorities of voters approve of rebates for buying electric vehicles, according to polling released earlier this year by the think tank Data for Progress.