When Carlette Duffy had her Indianapolis home appraised as part of a refinance application last year, it kept getting valued much lower than she expected.

Why some companies want everyone back in the office

Suspicious that her race may have played a role she ordered another appraisal, but this time concealed that she is Black by removing family photos and other items indicating her race from her home and asking a White friend to pose as her brother when meeting with the appraiser. The appraised value more than doubled during the third appraisal, leading Duffy to file a Fair Housing complaint against the lenders and appraisers she had worked with alleging racial discrimination.

Duffy purchased her home for about $100,000 three years ago and, given home price appreciation in her area, she expected her home’s value to be about $185,000 when she applied to refinance her loan in March of last year, according to the Fair Housing Center of Central Indiana, a housing non-profit that investigated her case and filed the complaint on her behalf.

But her appraisal came back at only $125,000. A second appraisal from a different company was even lower at $110,000. She paid for a separate market analysis for her home, which concluded a possible list price of $187,000 and challenged both appraisals. But she was told the previous appraisal values would not be amended.
“I felt completely defeated,” Duffy said.

She began to wonder if her race was impacting how her home was being valued and the comparable properties that were being used. So she set up a fair housing test. 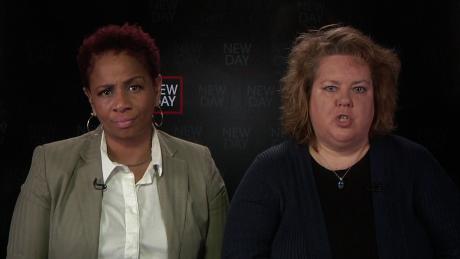 When arranging for a third appraisal, she did not reveal her race or gender on the application, according to the complaint. She kept communication to email and told the appraiser that she would be out of town and her brother would be at her home during the appraisal. She removed photos of herself and her family, as well as African-American art and some books which might identify her race. Then a White friend posed as her brother and met the appraiser instead of her.
That home appraisal valued her home at $259,000, nearly $150,000 more than her lowest appraisal.
At first she felt vindicated, she said in an interview on CNN’s New Day. “It allowed me to see that I knew that I was right. But then you think about the fact that I had to remove myself from my home in order for my home to have value — that’s the part that really hurts,” she said. “It felt dehumanizing, it felt demoralizing.”
Together with the local Fair Housing Center, Duffy alleges in complaints filed with the US Department of Housing and Urban Development that the lenders, appraisal companies and appraisers she worked with violated Fair Housing laws by allowing race and color to impact their appraisals or lending practices. The complaint alleges that the comparable home sales — or comps — used to value Duffy’s home were not fair because they were from homes located too far away or from neighborhoods with particular demographics.
Those named in the complaint have denied to CNN that discrimination took place. As part of these filings HUD will conduct an investigation to determine whether there were any legal violations.

The lower appraisals that Duffy alleges in her complaint have an impact — not just on her personal wealth and her home’s value, but on her entire neighborhood.
Duffy lives in a historically Black neighborhood in Indianapolis where homeownership is often passed down to family members and fewer homes get put up for sale, said Amy Nelson, executive director of the FHCCI, in an interview on CNN’s New Day.
“There aren’t a lot of comps,” she said. “But her neighborhood shouldn’t be devalued because of that or because of the race of her particular neighborhood, when we have seen the neighborhoods of those around her gentrify.”

Research has shown that homes in largely Black neighborhoods are valued less than homes in mainly White areas, even when housing type and income of the areas are the same. In the average US neighborhoods where the share of the population is 50% Black, homes are valued at roughly half the price of homes in neighborhoods with no Black residents, according to recent research from the Brookings Institute.
Homes in majority Black neighborhoods in the US have been undervalued by an average of $46,000 over nearly a decade, according to a recent analysis by Redfin. The firm looked at more than 73 million single-family homes listed and sold between January 2013 and February 2021 and found a major gap between houses sold in Black and White neighborhoods.
And the disparity seems to be getting worse.
A separate study found that the racial composition of a neighborhood is affecting values now even more than it was 40 years ago, with the appraisal gap roughly doubling since 1980. The gap between average home appraisals in majority White neighborhoods and those that are mainly Black and Latina was $164,000 in 2015, up from about $86,000 in 1980, according to a study from sociologists Junia Howell at the University of Pittsburgh and Elizabeth Korver-Glenn at the University of New Mexico.

The researchers conclude that this growing gap is primarily due to appraising practices, including the use of sale comparisons, which has allowed appraisals impacted by race and appraisers’ assumptions about neighborhoods to devalue communities of color.
“In the past year, we have heard stories across our country of African Americans questioning the appraisal process and the values assigned to their homes,” said Noe Rojas, director of systemic investigations at the FHCCI. “This shows how systemic racism continues to haunt neighborhoods of color.”
Source: Read Full Article